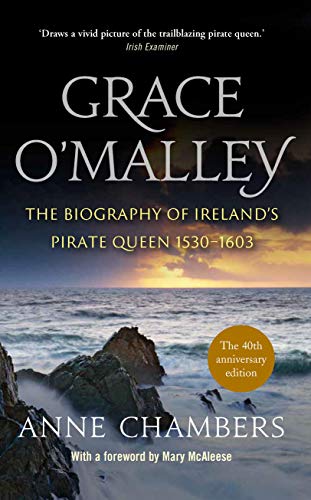 Grace O'Malley is the story of one remarkable woman's quest for survival and fulfilment, by land and by sea.

In 1979, Anne Chambers' original biography of Ireland's pirate queen, airbrushed from historical record over the centuries, put her on the map once again. The biography became a milestone in Irish publishing and the catalyst for the restoration of Grace O'Malley to political, social and maritime history, as well as establishing her as an inspirational female role model.

In the 40th anniversary edition of this international bestselling biography, drawn from rare contemporary manuscript records, the author presents Ireland's great pirate queen not as a vague mythological figure but as one of the world's most extraordinary female leaders. Political pragmatist and tactician, rebel, intrepid mariner and pirate, wife, lover, mother, grandmother and matriarch, the 'most notorious woman in all the coasts of Ireland', Grace O'Malley challenged and triumphed over the social and political barriers she encountered in the course of her long, pioneering life.

This updated edition brings one of the world's first recorded feminist trailblazers to a new generation awakened to the global focus on gender equality as well as positive ageing.

'You cannot be what you cannot see, and with women all too often airbrushed from history, the importance of this biography cannot be underestimated.' Orla O'Connor, Director, National Women's Council of Ireland

'A superbly researched work ... it salvages the 16th century Mistress of the Western Waves from the rather frivolous folklore which surrounds her.' The Irish Times

'A historical reality which is equally if not more compelling than the legend.' Sunday Tribune

'Grace O'Malley ... a woman who can truly claim to have been 400 years before her time ... and Anne Chambers' biography is as innovative as its subject.' Enda Kenny, former Taoiseach of Ireland

Anne Chambers is a biographer, novelist and screenplay writer. Her books include The Great Leviathan: Howe Peter Browne, 2nd Marquess of Sligo, 1788-1845; TK Whitaker: Portrait of a Patriot; Eleanor, Countess of Desmond, 1545-1638; Ranji: Maharajah of Connemara; At Arm's Length - Aristocrats in the Republic of Ireland; Pirate Queen of Ireland (biography for children). She is passionate about making the past accessible, as well as adjusting history's glaring gender imbalance.