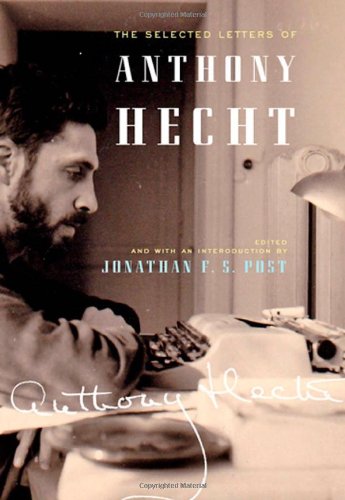 Those interested in the lives of contemporary poets will read these highly personal letters with delight and surprise.

Pulitzer Prize-winning poet Anthony Hecht (1923-2004) was known not only for his masterful control of form and language but also for his wit and humor. With the help of Helen Hecht, the poet's widow, Jonathan F. S. Post combed through more than 4,000 letters to produce an intimate look into the poet's mind and art across a lifetime. The letters range from Hecht's early days at summer camp to college at Bard, to the front lines of World War II, to travels abroad in France and Italy, to marriage, and to fame as a poet and critic. Along the way, Hecht corresponded with well-known poets such as John Hollander, James Merrill, Anne Sexton, and Richard Wilbur. Those interested in the lives of contemporary poets will read these highly personal letters with delight and surprise.
Aside from the literary light it sheds, Hecht's correspondence is just plain fun to read-witty and learned, warm and humane... Hecht's work depicts both light and shadow, fashioning from their chiaroscuro poems that figure among the finest of the last century. -- David Yezzi Wall Street Journal We can only be grateful that Anthony Hecht was a pack-rat, so that nothing was lost-all those anecdotes, all those loves lost and found, all the ups and downs that made for a life in poetry and for a poetry now collected and preserved, so that his voice remains crystal-clear in death as it was in life. -- Gerard Malanga Rain Taxi Review of Books On the spectrum of letter-writing readability, Anthony Hecht combines elements of Keats and Moore. He is never less than charmingly fluent... Hecht as a letter writer is often at his best with confident, off-the-cuff assessments of writers, their lives and works. -- Patrick Kurp Quarterly Conversation Aside from the literary light it sheds on his work and the work of others, Hecht's correspondence is engaging and fun to read... This extensive collection of letters offers satisfying insights into the life and times of one of the major literary figures of the last century -- Mike Puican TriQuarterly A resounding success. -- David Mason The New Criterion Anyone with a serious interest in US poetry from the mid-20th centruy on will be grateful to Post for his scrupulous selection and editing of Hecht's letters... Whether whimsical or erudite, the letters reveal Hecht's lively imagination and intelligence and the literary scene of the era. Choice A model edition. The letters themselves are vastly interesting for what Hecht says about himself and his poems. -- Edward Mendelsohn New York Review of Books A handsome, tactfully edited and satisfying volume. -- Matthew Sperling Literary Review In Hecht's letters we find ourselves in the presence of a man who takes poetry seriously, demands respect for it, and honors it with his powerful and scrupulous mind. -- X. J. Kennedy The Hopkins Review Hecht's Letters provide a lavish feast - intellectual, poetic, and aesthetic - and reveal his rich imagination, profound ideas, and moral vision. -- Jeffrey Meyers Essays in Criticism These letters record a lively and graceful intelligence fully and sympathetically engaged with the arts of music, painting, and poetry, and with the lives of his many correspondents. -- Geoffrey Lindsay American Book Review
Anthony Hecht (1923-2004) was an American poet and critic who received numerous awards for his poetry, including the Pulitzer Prize, the Ruth Lilly Prize, the Bollingen Prize, the Wallace Stevens Award, and the Frost Medal. Jonathan F. S. Post is Distinguished Professor of English at the University of California at Los Angeles. He is the editor of Green Thoughts, Green Shades: Essays by Contemporary Poets on the Early Modern Lyric.