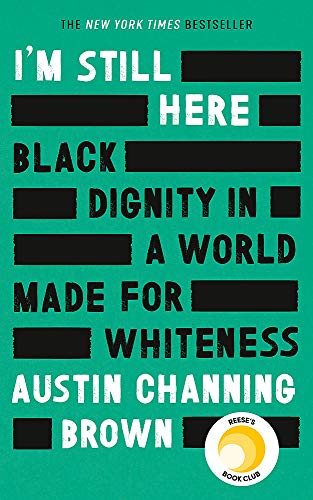 A REESE'S BOOK CLUB X HELLO SUNSHINE BOOK PICK * THE NEW YORK TIMES BESTSELLER * From a leading voice on racial justice, an eye-opening account of growing up as a Black woman in America.

I'm Still Here: Black Dignity in a World Made for Whiteness: 'A leading new voice on racial justice' LAYLA SAAD, author of ME AND WHITE SUPREMACY Austin Channing Brown

'A leading new voice on racial justice' LAYLA SAAD, author of ME AND WHITE SUPREMACY

This book is my story about growing up in a Black girl's body. It's about surviving in a world not made for me.

Austin Channing Brown's first encounter with a racialized America came at age seven, when she discovered her parents named her Austin to deceive future employers into thinking she was a white man. Growing up in majority-white schools and churches, Austin writes, 'I had to learn what it means to love Blackness,' a journey that led to a lifetime spent navigating America's racial divide as a writer, speaker and expert helping organisations practice genuine inclusion.

In a time when nearly every institution (schools, churches, universities, businesses) claims to value diversity in its mission statement, Austin writes in breathtaking detail about her journey to self-worth and the pitfalls that kill our attempts at racial justice. Her stories bear witness to the complexity of America's social fabric and invite the reader to confront apathy, recognise God's ongoing work in the world and discover how Blackness-if we let it-can save us all.

'An example of how one woman can change the world by telling the truth about her life with unflinching, relentless courage' GLENNON DOYLE, author of UNTAMED

'Most people say, "that books has legs"; I measure the impact of a book by how often I throw it across the room. [Austin's book] has serious wings. It broke me open' BRENE BROWN

Austin Channing Brown introduces herself as a master memoirist. This book will break open hearts and minds * Glennon Doyle *
Most people say, 'that books has legs;' I measure the impact of a book by how often I throw it across the room. [Austin's book] has serious wings. It broke me open * Brene Brown *
Powerful . . . Brown calls on readers to live their professed ideals rather than simply state them * Publishers Weekly *
Takes readers on a journey through the racial divide in a way we've truly never seen before. Powerful, haunting, and absolutely impossible to put down, [Brown's] account of what it's like to grow up black, middle-class, and female in modern America is not to be missed * PopSugar *
A deeply personal celebration of blackness that simultaneously sheds new light on racial injustice and inequality while offering hope for a better future * Shondaland *
I have laughed, I have held back tears, I have reflected with joy, hope and hurt while reading. Austin captures perfectly the sentiment of many black people in America. She's not only telling her story, she's telling our story. Austin is a gift to the body and the culture * Lecrae *
The movement toward diversity and forgiveness, [Brown] points out, too often involves white people seeking credit for recognizing the crimes of the past even as they do nothing to fix things today, and black people being required to provide endless absolution and information while calmly enduring dignity-eroding and rage-inducing injustices * Library Journal *
Brown passionately rejects facile reliance on 'hope,' stating that 'in order for me to stay in this work, hope must die' and 'the death of hope gives way to a sadness that heals, to anger that inspires, to a wisdom that empowers me.' An eloquent argument for meaningful reconciliation focused on racial injustice rather than white feeling * Booklist *
Austin Channing Brown is a leading new voice on racial justice and she is the author of one of my favourite books of 2018, which is called I'm Still Here: Black Dignity in a World Made for Whiteness. Austin is committed to exploring the intersections of racial justice, faith, and Black womanhood * Layla Saad, author of ME AND WHITE SUPREMACY *
Austin Channing Brown is a speaker, writer, and media producer providing inspired leadership on racial justice in America. She is the author of the bestselling I'm Still Here: Black Dignity in a World Made for Whiteness and the executive producer of the web series The Next Question. Her writing and work have been featured by outlets such as On Being, Chicago Tribune, Christianity Today, Sojourners, Shondaland and WNYC. Find out more at austinchanning.com.
GOR010777604
9780349014876
0349014876
I'm Still Here: Black Dignity in a World Made for Whiteness: 'A leading new voice on racial justice' LAYLA SAAD, author of ME AND WHITE SUPREMACY Austin Channing Brown
Austin Channing Brown
Gebraucht - Wie Neu
Gebundene Ausgabe
Little, Brown Book Group
2020-08-20
192
N/A
Die Abbildung des Buches dient nur Illustrationszwecken, die tatsächliche Bindung, das Cover und die Auflage können sich davon unterscheiden.
Das Buch wurde gelesen, ist aber in gutem Zustand. Alle Seiten sind intakt, der Einband ist unversehrt. Leichte Gebrauchsspuren am Buchrücken. Das Buch wurde gelesen, sieht jedoch noch wie neu aus. Der Bucheinband weist keine sichtbaren Gebrauchsspuren auf. Gegebenenfalls ist auch ein Schutzumschlag verfügbar. Keine fehlenden oder beschädigten Seiten, keine Risse, eventuell minimale Knicke, keine unterstrichenen oder markierten Textstellen, keine beschrifteten Ränder.