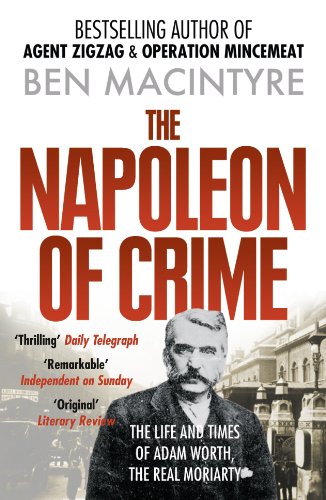 The Napoleon of Crime Ben Macintyre

The rumbustious true story of the Victorian master thief who was the model for Conan Doyle's Moriarty, Sherlock Holmes' arch-rival. From the bestselling author of 'Operation Mincemeat' and 'Agent Zigzag'.

The Napoleon of Crime: The Life and Times of Adam Worth, the Real Moriarty Ben Macintyre

The rumbustious true story of the Victorian master thief who was the model for Conan Doyle's Moriarty, Sherlock Holmes' arch-rival. From the bestselling author of 'Operation Mincemeat' and 'Agent Zigzag'.

Adam Worth was the greatest master criminal of Victorian times. Abjuring violence and setting himself up as a perfectly respectable gentleman, he became the ringleader for the largest criminal network in the world and the model for Conan Doyle's evil genius, Moriarty.

At the height of his powers, he stole Gainsborough's famous portrait of Georgiana, Duchess of Devonshire, then the world's most valuable painting, from its London showroom. The duchess became his constant companion, the symbol and substance of his achievements. At the end of his career, he returned the painting, having gained nothing material from its theft.

Worth's Sherlock Holmes was William Pinkerton, founder of America's first and greatest detective agency. Their parallel lives form the basis for this extraordinary book, which opens a window on the seedy Victorian underworld, wittily exposing society's hypocrisy and double standards in a storytelling tour de force.

'A most remarkable and entertaining biography. It is a highly charged thriller, a moving love affair, a dramatic history of the Victorian criminal underworld, a noble tragedy'
Alexander Waugh, Independent on Sunday

'A well-researched and lively account...Macintyre has an appetite for fact, assiduity and wit' Asa Briggs, The Times

'This is a delicious mingling of through research, lyrical storytelling and empathetic crime reporting...a stylish, original, and picturesque story that reads better than the vast bulk of crime books currently in print' Michael Coren, Literary Review

Ben MacIntyre is the author of Forgotten Fatherland, A Foreign Field, Agent Zigzag, Operation Mincemeat and Josiah the Great. He is the Associate Editor and a columnist for The Times and was the paper's parlimentary sketch-writer, as well as its correspondent in New York, Paris and Washington. He lives in London.