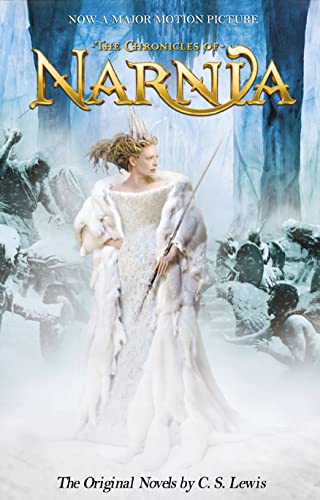 Gebrauchter Preis
€6,39
Kostenloser Versand
Here is a world where a witch decrees eternal winter; where there are more talking animals than people; and where battles are fought by Centaurs, Giants and Fauns. This work includes all seven books in a bind up.
product.trustPilotMiniTitle:
Sehr Gut

The Chronicles of Narnia Zusammenfassung

"The Chronicles of Narnia" have enchanted millions of readers over the last fifty years and the magical events described in C.S. Lewis's immortal prose have left many a lasting memory for adults and children alike. Now you can enjoy all seven in this stunning bind up with a stunning film tie-in cover. For here is a world where a witch decrees eternal winter; where there are more talking animals than people; and where battles are fought by Centaurs, Giants and Fauns. Now you can discover the magic of the world of Narnia when you read all seven books in this exciting bind up. With a film tie-in cover, this book will be a hit with children and adults alike.

The Chronicles of Narnia Bewertungen

CLIVE STAPLES LEWIS was born in Belfast in 1898. As a child, he was fascinated by the fairy tales, myths and ancient legends recounted to him by his Irish nurse. The image of a faun carrying parcels and an umbrella in a snowy wood came to him when he was sixteen. However, it was not until many years later as a professor at Cambridge University, that the faun was joined by an evil queen and a magnificent lion. Their story became The Lion, The Witch And The Wardrobe, one of the best loved books of all time.