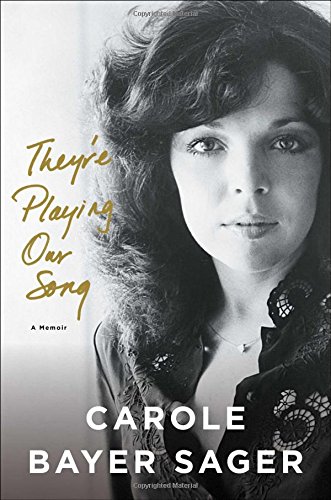 They're Playing Our Song: A Memoir Carole Bayer Sager

Grammy and Academy Award-winning songwriter Carole Bayer Sager shares the remarkably frank and darkly funny story of her life in and out of the recording studio, from her fascinating (and sometimes calamitous) relationships to her collaborations with some of the greatest composers and musical artists of our time.

For five decades, Carole Bayer Sager has been among the most admired and successful songwriters at work, responsible for her lyrical contributions to some of the most popular songs in the English language, including Nobody Does It Better, A Groovy Kind of Love, Don't Cry Out Loud, and the theme from the movie Arthur, The Best That You Can Do (about getting lost between the moon and New York City).

Her relationship with composer Marvin Hamlisch was the basis of the long-running hit musical, They're Playing Our Song, for which she wrote the lyrics. And her work with composer Burt Bacharach, to whom she was also married for ten years, produced pop standards such as On My Own and That's What Friends Are For (inspired by her friendship with Elizabeth Taylor), which raised over two million dollars for AIDS research.

But while her professional life was filled with success and fascinating people, her personal life was far more difficult and dramatic. In this memoir, Carole Bayer Sager tells the surprisingly frank and darkly humorous story of a woman whose sometimes crippling fears and devastating relationships inspired many of the songs she would ultimately write.

They're Playing Our Song will fascinate anyone interested in the craft of songwriting and the joy of collaboration, but Carole Bayer Sager's memoir is also a deeply personal account of how love and heartbreak made her the woman, and the writer, she is.
Reads like a candid conversation over a bottle of Mersault on a breezy Bel Air night.
-Vanity Fair
Engaging...hilarious and heartrending account...memoir as very good chick-lit.
-Wall Street Journal
This exceptionally candid memoir goes behind the scenes of her success to describe the fear and insecurity Sager says she's experienced throughout her life....Rarely, though, does Sager seem to be grinding an ax or even reveling in the Hollywood drama; the book always circles back to her thoughtful self-examination, and to how each of these characters and incidents affected her music.
-Los Angeles Times
Tenderly illustrates an insider's account of life behind the music....Sager's writing is comfortably conversational, and her stories are lovingly told.
-Publisher's Weekly
From the hit-prone Carole Bayer Sager comes this delightful and funny tell-all crammed with famous names and famous songs. Every few pages you'll say to yourself, 'I didn't realize she wrote that.'
-Steve Martin
Carole Bayer Sager is simply the finest. Having lived, loved and worked alongside gold standard major hitters like Marvin Hamlisch, Burt Bacharach, David Foster, and Peter Allen, she has had to be. Carole braids together lyrics the way Venus and Serena spin aces - repeatedly, miraculously - and this book is one of the best, most lasting songs she has ever written.
-Carly Simon
I thoroughly enjoyed this book. It is genuinely funny, and Carole's voice - bright, self-deprecating, but fearful and searching - comes through wonderfully well. The writing on Burt Bacharach is a highlight - really keenly observed - and the treatment of the depth of her despair over losing him is terrific.
-Bette Midler
Carole gives us a front row seat on the piano bench as she knocks out hit after hit with Marvin Hamlisch and Burt Bacharach, sits down with Bob Dylan in his barn, Michael Jackson in his studio, and Elizabeth Taylor on her bed (no, they didn't churn out a hit, just a deep friendship). This is a funny, fast paced, heartfelt book by an accomplished and glamorous woman who openly shares her journey with us.

-Candice Bergen
Many women struggling in a man's world will enjoy the author's stories about her early family life and the challenges she faced growing up.
-Library Journal
Before Beautiful: The Carole King Musical, there was They're Playing Our Song, Sager's musical based on her real-life relationship with composer Marvin Hamlisch. She recounts that story and much more in this honest, heartfelt, and often humorous memoir....Music lovers will enjoy getting to know the talent behind all those memorable songs.
-Booklist
Her voice has an honest vulnerability that keeps you turning pages.
-Buffalo News
While sensitively chronicling her numerous ups and downs, the author is generous in her sharing of the anecdotes behind the music. The narrative is breezy and accessible, with writing that plays to the strengths of her crisp sense of humor, deep attachment to music, and resonant lust for life.
-Kirkus Reviews
With more than 400 writing credits to her name, it's no surprise that Carole Bayer Sager's memoir, They're Playing Our Song, is as captivating, thoughtful and memorable as her lyrics.
-Shelf Awareness
Carole Bayer Sager has written more than four hundred songs. Nominated for over fifteen awards, she has won an Oscar, two Golden Globes, and a Grammy for Song of the Year. She recorded three solo albums and with Marvin Hamlisch wrote the hit Broadway musical, They're Playing Our Song. With Peter Allen she cowrote half of the songs used in in the Broadway musical The Boy From Oz, which starred Hugh Jackman and told the story of Peter's life. She is a member of the Songwriter's Hall of Fame and was awarded a Star on Hollywood Boulevard. She lives in Los Angeles with her husband, Robert Daly, and shares their bed with three unruly dogs who are unimpressed with their accomplishments.
GOR008734994
9781501153266
1501153269
They're Playing Our Song: A Memoir Carole Bayer Sager
Carole Bayer Sager
Gebraucht - Sehr Gut
Gebundene Ausgabe
Simon & Schuster
20170101
352
null null null null null null null null null null
Die Abbildung des Buches dient nur Illustrationszwecken, die tatsächliche Bindung, das Cover und die Auflage können sich davon unterscheiden.
Dies ist ein gebrauchtes Buch. Es wurde schon einmal gelesen und weist von der früheren Nutzung Gebrauchsspuren auf. Wir gehen davon aus, dass es im Großen und Ganzen in einem sehr guten Zustand ist. Sollten Sie jedoch nicht vollständig zufrieden sein, setzen Sie sich bitte mit uns in Verbindung.