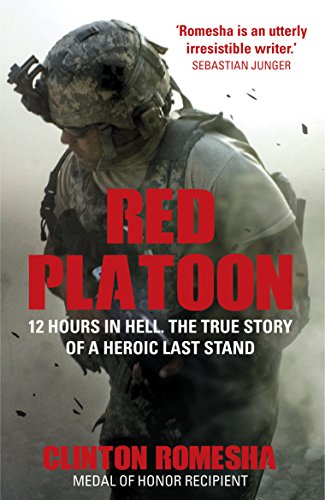 The Taliban can see every move and attack is imminent. This is the heart-stopping, awe-inspiring true story of the platoon's brutal struggle for survival, told by the man who fought to defend his men, and who was awarded the Medal of Honor for his extraordinary bravery.

Isolated Command Post Keating - one of the most vulnerable US army bases in Afghanistan. Located at the bottom of a deep valley, soliders are exposed. The Taliban can see every move and attack is imminent. Outnumbered Just before sunrise on 3 October 2009, hundreds of Taliban insurgents open fire from all angles. Red Platoon and the Black Knight Troop are pinned down. They hear the message over the radio: Enemy in the Wire. The Taliban are inside the camp. But never outgunned. This is the heart-stopping, awe-inspiring true story of the platoon's brutal struggle for survival, told by the man who fought to defend his men, and who was awarded the Medal of Honor for his extraordinary bravery.
"A brilliant, wrenching book about war ... it's more intense and horrifying than you could imagine" * London Evening Standard *
"Utterly gripping from start to finish ... unflinchingly honest about the realities of war." * Bookbag *
"Awe-inspiring ... Utterly gripping from start to finish" * CGA Bookclub *
"Brilliant, wrenching" * i *
"I read the first half of Red Platoon in one sitting and that night had such intense combat dreams that I actually thought twice about picking the book up again. In addition to being a superb soldier, Romesha is an utterly irresistible writer. I'm completely overwhelmed by what he has done with this book. The assault on Camp Keating is a vitally important story that needs to be understood by the public, and I cannot imagine an account that does it better justice that Romesha's." -- Sebastian Junger
"Rendered hour-by-hour and sometimes second by second, here is battle narrative the way it's supposed to be written. Gritty, plangent, and unflinching, Red Platoon is sure to become a classic of the genre. Through his courageous and no doubt painful act of remembrance, Romesha has done his comrades, indeed all of us, a great service-leaving an epitaph that will live through the ages." -- Hampton Sides, author of Ghost Soldiers and In the Kingdom of Ice
"Red Platoon is riveting. Like many who were in either Iraq, Afghanistan, or both, I often read books about the wars reluctantly, because it is hard to capture the essence of the experience. In my view Red Platoon is a brilliant book. Had Clint Romesha depicted the soldiers at Keating as a collection of steely-eyed warriors, their feat would have been impressive. Because he captures the reality of a collection of personalities as diverse as America itself, their courage is truly inspiring." -- General Stanley McChrystal, U.S. Army, Retired
"Red Platoon celebrates the most crucial aspect of military operations: the team. Clinton Romesha and the men of Black Knight Troop faced harrowing conditions and a determined enemy during the Battle for COP Keating, and in the process discovered exactly who they are. This account is an important tribute to everyone who fought, and especially to the eight Americans who on that day made the ultimate sacrifice for their country." -- Mark Owen, author of No Easy Day
"The book is riveting in its authentic detail, right down to the determined attempts to recover American bodies before the Taliban could. Romesha ably captures the daily dangers faced by these courageous American soldiers in Afghanistan." * Kirkus *
"Red Platoon exemplifies the courage and resiliency our country was founded on. Clint is a true brother and a man that I look up to." -- Dakota Meyer, Medal of Honor Recipient and author of Into the Fire
"A visceral, heart-pounding account of men in close-quarter combat that is simply impossible to put down. Astonishingly intimate and beautifully written. A word of advice: don't start this book if you're planning on doing anything else for the next few hours." -- Scott Anderson, author of Lawrence in Arabia
"The men of Red Platoon and their actions at COP Keating deserve to be known. Clint Romesha's story takes hold from page one and makes you feel every inch of the battle, but it is the bond between soldiers that will stick with you. Red Platoon is on my list of the best books about the Afghan war." -- Kevin Maurer, bestselling co-author of No Easy Day
Former Staff Sergeant Clinton L. Romesha enlisted in the U.S. Army in 1999. He was deployed twice to Iraq in support of Operation Iraqi Freedom, and once to Afghanistan in support of Operation Enduring Freedom. At the time of the deadly attack on Combat Outpost (COP) Keating on 3 October 2009, Staff Sgt. Romesha was assigned as a section leader for Bravo Troop, 3-61st Cavalry, 4th Brigade Combat Team, 4th Infantry Division. He is the recipient of numerous awards and decorations, including the Medal of Honor, which has been received by only twelve others for the heroism they displayed while serving in Iraq or Afghanistan. Romesha separated from the Army in 2011. He lives with his family in North Dakota.
GOR008092800
9781784751814
1784751812
Red Platoon Clinton Romesha
Clinton Romesha
Gebraucht - Sehr Gut
Broschiert
Cornerstone
2016-12-15
400
N/A
Die Abbildung des Buches dient nur Illustrationszwecken, die tatsächliche Bindung, das Cover und die Auflage können sich davon unterscheiden.
Dies ist ein gebrauchtes Buch. Es wurde schon einmal gelesen und weist von der früheren Nutzung Gebrauchsspuren auf. Wir gehen davon aus, dass es im Großen und Ganzen in einem sehr guten Zustand ist. Sollten Sie jedoch nicht vollständig zufrieden sein, setzen Sie sich bitte mit uns in Verbindung.