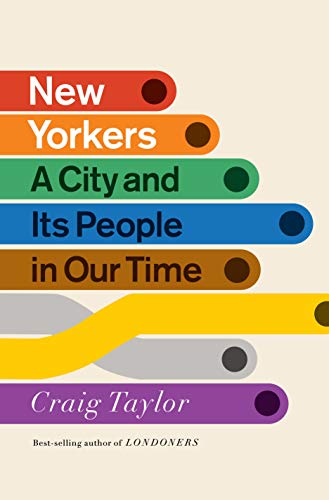 From the best-selling author of Londoners, a symphony of contemporary New York in the magnificent words of its people.

New Yorkers: A City and Its People in Our Time Craig Taylor

A symphony of contemporary New York told through the magnificent words of its people - from the best-selling author of Londoners.

In the first twenty years of the twenty-first century, New York City has been convulsed by terrorist attack, blackout, hurricane, recession, social injustice, and pandemic. New Yorkers weaves the voices of some of the city's best talkers into an indelible portrait of New York in our time - and a powerful hymn to the vitality and resilience of its people.
Vibrant and bursting with life, New Yorkers explores the nonstop hustle to make it; the pressures on new immigrants, people of colour, and the poor. It captures the strength of an irrepressible city that - no matter what it goes through - dares call itself the greatest in the world.

Drawn from millions of words, hundreds of interviews, and six years in the making, New Yorkers is a grand portrait of an irrepressible city and a hymn to the vitality and resilience of its people.

Beautifully woven * Sunday Times *
One of Craig Taylor's many skills as an interviewer lies in his eye for the vivid detail that captures a larger abstraction ... Remarkable -- Craig Brown * Mail on Sunday *
Extraordinary city stories ... ambitious and entertaining ... [Taylor] does a fine job of telling the New York story -- Hari Kunzru * Guardian *
As gorgeous, cacophonous and shocking as New York itself. Like those great oral historians Studs Terkel and Ronald Blythe, Craig Taylor has the gift of drawing out the most idiosyncratic confidences, creating a magical, uproarious and sometimes terrifying portrait of life in the ultimate city - Olivia Laing, author of The Lonely City
A symphonic choir of voices rising from the five boroughs ... the city is hopping, punching, reeling, dancing, thrumming, honking, thriving ... Taylor is as skilled a writer of literary nonfiction as I have ever read * The TLS *
An incredible achievement. Insightful, funny, surprising, profound, moving and honest. This could be the great American novel - and it isn't even a novel - Joe Dunthorne, author of Submarine
This is a stunning piece of work. New Yorkers is rich with the voices and stories of the city; voices that Craig Taylor has listened to with attentive generosity and that he offers us here with something close to love - Jon McGregor, author of Reservoir-13
Jaw-dropping ... Enthralling ... Start spreading the news: Taylor's book is a stunning work of modern social history * Independent *
A monumental and beautiful testimony to a city and to life itself ... This is what Craig Taylor has done: not just reveal a city, but the human spirit that lights the city; that spirit, which despite its flaws and madness, seems in the end to always wish to transform chaos and hatred into meaning and love - Jonathan Ames, author of The Extra Man
Every decade or so, a book comes along to define an epoch in New York life . . . Craig Taylor's New Yorkers is one of those. It is a monumental document of our age of precarity, catastrophe, and scrolling anomie. Just as importantly, though, it is an antidote, the opposite of a lockdown: a welcoming into the apartments of our neighbors and out into the living street. For those newly arrived to the city or long in love with it, New Yorkers belongs on the short shelf of required reading - Garth Risk Hallberg, author of City on Fire
Craig Taylor gets us. His sojourn in New York has resulted in a wonderful portrait of the city and its people, in good times and in bad, living, persevering, triumphant - Kevin Baker, author of Dreamland
An engrossing, multihued 'oral portrait' of New York City as told by the people who live there .... Admirers of the Big Apple will be enthralled * Publishers Weekly *
One of the most enjoyable trips to New York I've ever taken: fascinating, exciting and weird. Like the very best kind of guide, Craig Taylor showed me parts of the city I would never have found on my own - Chris Power, author of Mothers: Stories
In New Yorkers he has both perfected the method and found new range in his own voice. I lived in the city for six of the years covered here, but though Taylor does capture a tone I remember, I feel more that I've come to know the place better through the lens of his curiosity - John Jeremiah Sullivan, author of Pulphead
Craig Taylor has conducted Gotham's voices into a gorgeous score. He has such a gift for getting cities to pause for their solos and close ups. With Londoners and now New Yorkers a decade later, he's like a Carson, a Winfrey, a Letterman of the vox populi: generous with each human he sits down with, making them look good without any makeup and giving them all the best lines. I've never heard New York sound this good, this in tune, despite its seas of trouble - Leanne Shapton, author of Swimming Studies
Craig Taylor is the author of the best-selling Londoners. His other books, Return to Akenfield and One Million Tiny Plays About Britain, have both been adapted for the stage. He is also the editor of the literary magazine Five Dials. He lives in western Canada.
GOR011260150
9781848549739
1848549733
New Yorkers: A City and Its People in Our Time Craig Taylor
Craig Taylor
Gebraucht - Sehr Gut
Broschiert
John Murray Press
20210323
432
null null null null null null null null null null
Die Abbildung des Buches dient nur Illustrationszwecken, die tatsächliche Bindung, das Cover und die Auflage können sich davon unterscheiden.
Dies ist ein gebrauchtes Buch. Es wurde schon einmal gelesen und weist von der früheren Nutzung Gebrauchsspuren auf. Wir gehen davon aus, dass es im Großen und Ganzen in einem sehr guten Zustand ist. Sollten Sie jedoch nicht vollständig zufrieden sein, setzen Sie sich bitte mit uns in Verbindung.