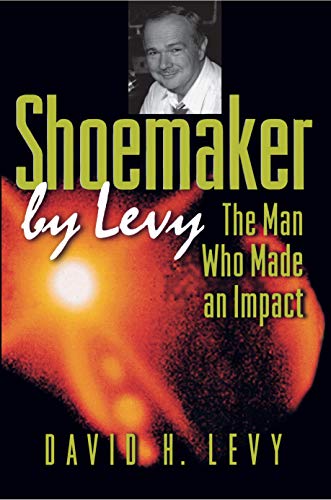 This work offers an insight into the life and work of Eugene Shoemaker, the famous scientist who, in 1993 together with David Levy, discovered one of the most remarkable comets ever recorded; Shoemaker-Levy 9, with its several neclei, 5 tails and two sheets of debris.

Shoemaker by Levy: The Man Who Made an Impact David H. Levy

It was a lucky twist of fate when, in the early 1980s, David Levy, a writer and amateur astronomer, joined up with the famous scientist Eugene Shoemaker and his wife, Carolyn, to search for comets from an observation post on Palomar Mountain in Southern California. Their collaboration would lead to the 1993 discovery of a remarkable comet, Shoemaker-Levy 9, with its several nuclei, five tails, and two sheets of debris spread out in its orbit plane. A year later, Levy would be by the Shoemakers' side again when their comet ended its four-billion-year-long journey through the solar system and collided with Jupiter in one of the most stunning astronomical displays of the 20th century. Not only did the collision revolutionize our understanding of the history of the solar system, but it also offered a spectacular confirmation of one scientist's life work. As a close friend and colleague of Shoemaker (who died in 1997 at the age of 69), Levy offers an insightful account of his life and the way it has shaped our thinking about the universe.
A warm profile of an unpretentious, significant scientist. . . . Levy's account notes the . . . comet/asteroid hunting conducted by Shoemaker and his wife, Carolyn, and he accents that with personal anecdotes from his own friendship and work with the couple. * Booklist *
Fellow comet hunter Levy . . . pens an affectionate portrait of his gifted if mercurial friend. . . . Readers will appreciate, in addition to its welcome memoir of Shoemaker, the book's overview of the development of planetary geology during the last half-century. * Publishers Weekly *
Levy's book should appeal to a wide range of readers, including not only scientists but also those seeking the personalities behind astronomy in the late 20th century.---Jay M. Pasachoff, Astronomy
David Levy's book has three main themes--biography, geology, and astronomy--neatly intertwined in a triple helix . . . Thanks to one of the most remarkable events in the entire history of astronomy, the names Shoemaker and Levy are now inextricably linked.---Arthur C. Clarke, Times Higher Education Supplement
Levy writes well, and his pacey style keeps his personal story bubbling along superbly. The book is everything a 'good read' should be.---David W. Hughes, Nature
David Levy . . . tells the story of Shoemaker's scientific odyssey with wit and panache.---Marcus Chown, New Scientist
This book is a wonderful read; it is very hard to put down once you start to flick through the pages, and it often brings a smile to your face. . . . The author covers so much of Shoemaker's life that the reader is taken through the most exciting periods in the history of planetary science, so not only do you get a biography of an inspirational man, but you get an inside view of the development of astrogeology from its creation to the present day. . . . Well written, fun, and a marvellous story of a man who made an impact on a subject that no other person is ever likely to be able to repeat.---Sarah Dunkin, The Observatory
This is a book for anyone interested in modern planetary sciences, in the progression and expansion of classical geology into, literally, other worlds. . . . Gene's brilliance, energy, wit, and his science show through in every chapter.---Susan W. Kieffer, Physics Today
[Levy] skillfully describes Shoemaker's work and sharply delineates his strong personality. * Scientific American *
David H. Levy has discovered twenty-one comets, eight of them using his own backyard telescope. Science Editor for Parade magazine, he also writes the monthly Star Trails column in Sky and Telescope. Levy is the author of many books relating to astronomy, from beginners' observing guides to such recent popular accounts as Comets: Creators and Destroyers. He has written two other scientific biographies: The Man Who Sold the Milky Way: A Biography of Bart Bok and Clyde Tombaugh: Discoverer of Planet Pluto. Levy's awards include an Emmy for his role in writing the 1997 Discovery Channel documentary Three Minutes to Impact.
GOR003244653
9780691002255
0691002258
Shoemaker by Levy: The Man Who Made an Impact David H. Levy
David H. Levy
Gebraucht - Sehr Gut
Gebundene Ausgabe
Princeton University Press
20001015
N/A
Die Abbildung des Buches dient nur Illustrationszwecken, die tatsächliche Bindung, das Cover und die Auflage können sich davon unterscheiden.
Dies ist ein gebrauchtes Buch. Es wurde schon einmal gelesen und weist von der früheren Nutzung Gebrauchsspuren auf. Wir gehen davon aus, dass es im Großen und Ganzen in einem sehr guten Zustand ist. Sollten Sie jedoch nicht vollständig zufrieden sein, setzen Sie sich bitte mit uns in Verbindung.