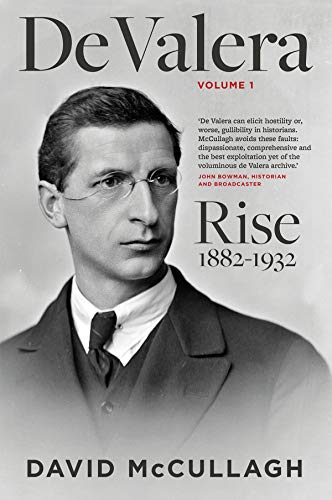 From the host of RTE's Primetime and author of The Reluctant Taoiseach, the widely acclaimed biography of John A. Costello, Rise 1882-1932 is the first volume of a major two-part reassessment of the man who shaped modern Ireland.

From the host of RTE's Primetime and author of The Reluctant Taoiseach, the widely acclaimed biography of John A. Costello, Rise 1882-1932 is the first volume of a major two-part reassessment of the man who shaped modern Ireland.

Eamon de Valera is the most single most consequential Irish figure of the twentieth century. He was a leader of the Easter Rising, the figurehead of the anti-treaty rebels during the dark days of the Civil War and later, as the founder of Fianna Fail and President of Ireland, the pivotal figure in the birth of the Republic.

While de Valera the statesman, the rebel, the visionary, has passed over into a sort of myth, de Valera the man remains an elusive, almost opaque presence. Precious little is known of his background, his motivations - the roots, in short, of his ferocious devotion to a very particular brand of Irish nationalism. Here, in the first part of a major two-volume reassessment, historian and broadcaster David McCullagh considers the man behind the colossal achievements. McCullagh sketches a ground-breaking portrait of de Valera, his times and his complex, ever-shifting legacy. The concluding volume of this work, Rule 1932-1975, will be published in autumn 2018.

'De Valera can elicit hostility or, worse, gullibility in historians. McCullagh avoids these faults: dispassionate, comprehensive and the best exploitation yet of the voluminous de Valera archive.' John Bowman, historian and broadcaster.

'Combines the investigative skills of an experienced journalist with the detachment of an accomplished historian. This vividly readable and at times gripping biography tackles head-on all of the perennial de Valera controversies, including his parentage, his role in the 1916 Rising, his relationship with Michael Collins, his responsibility for the Civil War and his subsequent rise to power, and does so with acuity and objectivity. A comprehensive, mature biography, both enlightening and entertaining.' Maurice Manning

David McCullagh is the author of The Reluctant Taoiseach, a biography of John A. Costello, and A Makeshift Majority, a history of the first inter-party government. He began working as a journalist with the Evening Press before joining RTE, where he currently presents the broadcaster's flagship current affairs programme, Primetime.