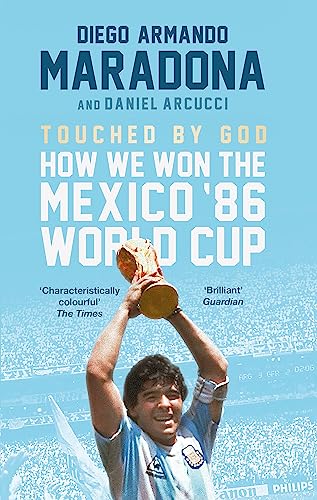 Over thirty years on from the magic of the '86 Mexico World Cup, Diego Maradona reveals, for the first time, the untold stories behind that one-of-a-kind championship.

Touched By God: How We Won the Mexico '86 World Cup Diego Maradona

In June 1986 Diego Maradona, considered by many to be the greatest footballer of all time, proudly hoisted the '86 Mexico World Championship Cup in his hands.

Now over thirty years on from that magical game, and after a life in sports marked by controversy, Maradona tells, for the first time, the untold stories behind that one-of-a-kind World Cup. Mexico '86 was the pinnacle of Maradona's career, and in this book he reveals all about every game, what happened afterwards in the locker room, the months leading up to the World Cup, when the team had to go to Mexico City a month early to avoid the overthrowing of the technical director by the Argentine president, Alfonsin, the mystery behind 'El Gran Capitan' Passarella ('78 World Cup Champion), the strategies and tactics that revolutionised the game, training in a country that was recovering from an earthquake, the public's hostility, the jerseys they went out to buy in Mexico City, the meeting in Colombia where the team really came together, his relationship to drugs: the clean World Cup, and the best goal in football history.

Mexico '86 is Maradona's World Cup and Maradona is who he is because of that World Cup. Explosive, gritty and unapologetic, Touched by God tells the inside story of one of the greatest football victories of all time.

Brilliant -- Barney Ronay * Guardian *
An exuberant narrator, bursting with telling details . . . enjoyable . . . Maradona's authentic voice of unreason and the best story in World Cup history carry you through -- Simon Kuper * Financial Times *
Characteristically colourful -- Matt Dickinson * The Times *
Open, honest contemplation * When Saturday Comes *
The book's greatest strength is that it feels unmistakeably like 1986 all over again . . . I loved this book. I loved its nostalgia * Irish News *

Diego Maradona was born in Buenos Aires in 1961. He is widely recognised as one of football's greatest players. He has played for Argentinos Juniors, Boca, Barcelona, Naples, Seville and Newell's Old Boys, but he will always be most strongly associated with the Argentinian national team. He lives in Dubai.

Daniel Arcucci is one of the most respected and recognized Argentinian sports journalists. He began his career at the legendary magazine El Grafico in Buenos Aires. He met Diego Maradona in the Christmas of 1985. He covered the '86 Mexico World Cup and interviewed Maradona more than 150 times. His books To Meet Diego and I am the Diego of the People were both bestsellers in Argentina. In 2007, he was awarded the Platinum Konex award for sports journalism.