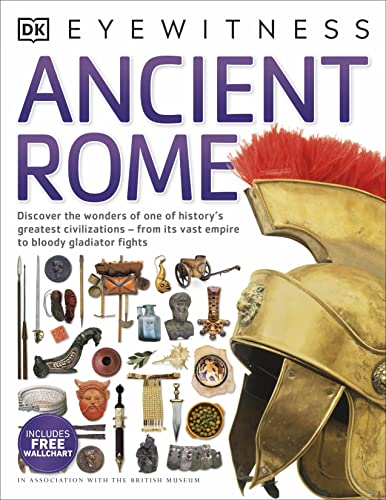 How did the Romans shape our world? What was life like for the average Roman? This is all about Romans and their civilization. From powerful senators and emperors to the Romans' ancient Gods, it reveals the history's most fascinating civilizations.

From Roman emperors and gods and goddesses to soldiers and gladiators, this is a compelling history of ancient Rome for children.

Who were Rome's most famous emperors? What was everyday life like for a soldier in the Roman army? How did the citizens of ancient Rome live? Did Roman gladiators really fight to the death in the mighty Colosseum? Eyewitness Ancient Rome provides the answers to these questions and many more.

Eyewitness Ancient Rome charts Rome's rise from a small city-state ruled by kings to one of the most powerful empires in history. It looks at what life was like inside the city's walls, examining the role women played in society and what it was like for children growing up in the city. It describes the typical Roman house and the food Romans ate. It explores how people spent their free time, whether paying a visit to the theatre or the public bath or watching gladiators fight a gruesome battle to the death in the world-famous Colosseum. It explores the gods and goddesses Romans worshipped, and their hopes for the afterlife.

Packed with fascinating facts, this lavishly illustrated book is the perfect introduction for any child who wants to know more about the history of ancient Rome.