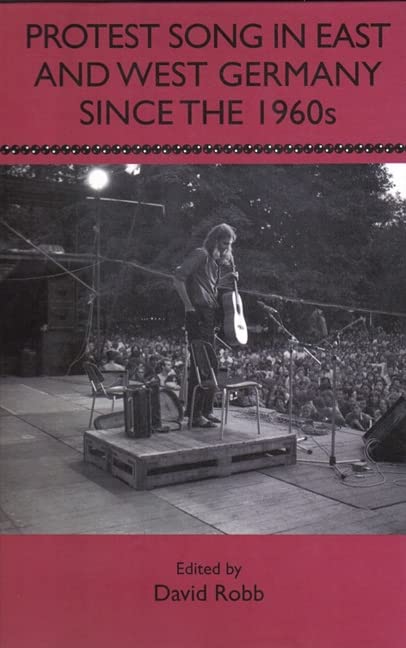 Nicht auf Lager
The German protest song from the 1960s through the 1990s and how it carried forth traditions of earlier periods.
Sehr Gut
Nur noch 0

Protest Song in East and West Germany since the 1960s Zusammenfassung

The modern German political song is a hybrid of high and low culture. With its roots in the birth of mass culture in the 1920s, it employs communicative strategies of popular song. Yet its tendencies toward philosophical, poetic, and musical sophistication reveal intellectual aspirations. This volume looks at the influence of revolutionary artistic traditions in the lyrics and music of the Liedermacher of east and west Germany: the rediscovery of the revolutionary songs of 1848 by the 1960s West German folk revival, the use of the profane "carnivalesque" street-ballad tradition by Wolf Biermann and the GDR duo Wenzel & Mensching, the influence of 1920s artistic experimentation on Liedermacher such as Konstantin Wecker, and the legacy of Hanns Eisler's revolutionary song theory. The book also provides an insider perspective on the countercultural scenes of the two Germanys, examining the conditions in which political songs were written and performed. In view of the decline of the political song form since the fall of communism, the book ends with a look at German avant-garde techno's attempt to create a music that challenges conventional cultural perceptions and attitudes. Contributors: David Robb, Eckard Holler, Annette Bluhdorn, Peter Thompson David Robb is Senior Lecturer in German Studies at the Queen's University of Belfast.

Protest Song in East and West Germany since the 1960s Bewertungen

[T]he book helps to make important material on the German folk revival in the 1960s and 1970s . . . accessible in English for the first time. Detailed endnotes and a very reliable bibliography of primary and secondary works add to the volume's usefulness. . . . [S]erves as an excellent resource for both specialists and newcomers to the subject. PEACE & CHANGE An illuminating final chapter explores the way the political song has been replaced in contemporary German youth culture by techno music....Two further chapters investigate the function of narrative role-play in the German protest song and explore the intriguing cat-and-mouse games played by the song-writers in the GDR with the censor and with official institutions. JOURNAL OF EUROPEAN STUDIES [A] fascinating collection of essays on protest music in (mostly) modern Germany.... All the essays are detailed and cover fresh ground. CHOICE Indisputably the best account on the subject in English. WORLD.FREEMUSIC.CZ Robb's study succeeds admirably in anchoring the Liedermacher and folk music scenes in the German traditions of the 19th and early 20th centuries, showing this to be a unique and culturally rooted phenomenon.... MONATSHEFTE [A]n excellent overview of the evolution of the political song in East and West Germany... [A]n accessible resource for both specialists and neophytes. GERMAN STUDIES REVIEW [A] welcome addition ... provides useful insights into the work of singers who have not been highlighted in the way in which high-profile personalities, such as Wolf Biermann, have been. [Avoids] a black and white view of political song in the GDR.... JOURNAL OF CONTEMPORARY EUROPEAN STUDIES [T]his stimulating book is highly recommended to anyone interested in political song and folk revival in Germany. FOLK MUSIC JOURNAL