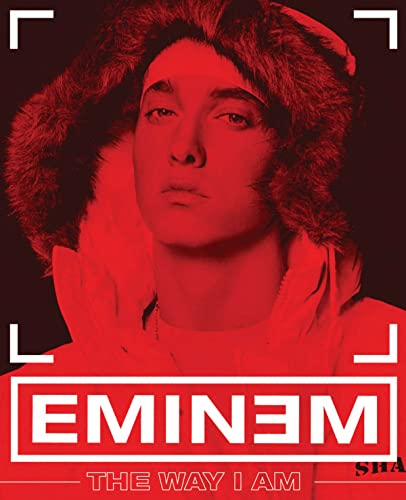 The Way I Am Eminem

The Way I Am Eminem

Fiercely intelligent, relentlessly provocative, and prodigiously gifted, Eminem is known as much for his enigmatic persona as for being the fastest-selling rap artist and the first rapper to ever win an Oscar. Everyone wants to know what Eminem is really like-after the curtains go down. In The Way I Am, Eminem writes candidly, about how he sees the world. About family and friends; about hip-hop and rap battles and his searing rhymes; about the conflicts and challenges that have made him who he is today.

Illustrated with more than 200 full-color and black-and-white photographs-including family snapshots and personal Polaroids, it is a visual self-portrait that spans the rapper's entire life and career, from his early childhood in Missouri to the basement home studio he records in today, from Detroit's famous Hip Hop Shop to sold-out arenas around the globe. Readers who have wondered at Em's intricate, eye- opening rhyme patterns can also see, first-hand, the way his mind works in dozens of reproductions of his original lyric sheets, written in pen, on hotel stationary, on whatever scrap of paper was at hand. These lyric sheets, published for the first time here, show uncut genius at work. Taking readers deep inside his creative process, Eminem reckons with the way that chaos and controversy have fueled his music and helped to give birth to some of his most famous songs (including "Stan," "Without Me," and "Lose Yourself").

Providing a personal tour of Eminem's creative process, The Way I Am has been hailed as "fascinating," "compelling," and "candid."

"The biggest rapper in history."--Rolling Stone

"Part autobiography, part photo gallery, part ephemera collection, it's a handsome roundup for an artist who has been notoriously reluctant to discuss his personal life anyplace but in his music."--New York Times

"There is this guy Eminem. He has created a sense of what is possible. He has sent a voltage around a generation. He has done this not just through his subversive attitude but also his verbal energy."--Seamus Heaney, winner of the Nobel Prize in Literature