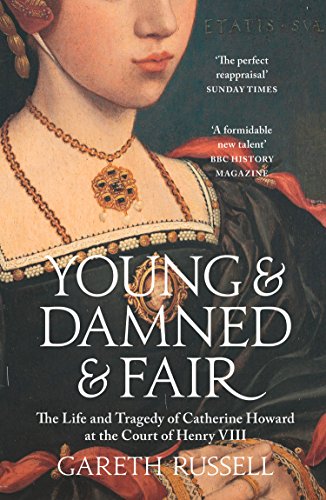 Young and Damned and Fair: The Life and Tragedy of Catherine Howard at the Court of Henry VIII Gareth Russell

Born into nobility and married into the royal family, Catherine Howard was attended every waking hour - secrets were impossible to keep. In this thrilling reappraisal of Henry VIII's fifth wife, Gareth Russell's history unfurls as if in real time to explain how the queen's career ended with one of the great scandals of Henry's reign. This is a grand tale of the Henrician court in its twilight, a glittering but pernicious sunset during which the king's unstable behaviour and his courtiers' labyrinthine deceptions proved fatal to many, not just to Catherine Howard.

A Daily Mail Book of the Week

'A timely and powerful re-examination of Henry's fifth queen ... Gareth Russell has done some beautiful new research to indicate that Catherine was not as foolish as some historians have suggested, and that her death was managed and manipulated by her offended husband, purely for his own revenge ... I love it when historians take the women who have been neglected by history seriously and study their lives rather than accepting stereotypes' Philippa Gregory

'"Young and Damned and Fair" is everything a historical biography should be' Kathryn Warner, author of "Edward II: The Unconventional King"

'Russell marries slick storytelling with a great wealth of learning about sixteenth-century personalities and politics. The result is a book that leads us deep into the nightmarish final years of Henry VIII's reign, wrenching open the intrigues of a poisonous court in a realm seething with discontent. At the heart of it all is the fragile, tragic figure of Catherine Howard, whose awful fate is almost unbearable to watch as it unfolds. This is authoritative Tudor history written with a novelist's lightness of touch. A terrific achievement' Dan Jones

'A magnificent account of the rise and fall of Henry VIII's tragic fifth queen - compelling, thought-provoking and above all real. In Russell's meticulously researched narrative Catherine Howard and her household are brought to life as never before. Hugely enjoyable' Adrian Tinniswood

'This fascinating and ultimately heartbreaking account of Henry VIII's doomed fifth wife brings to life the cruel, gossip-fuelled, back-stabbing world of the court in which Catherine Howard rose and fell. The uncommonly talented Gareth Russell has produced a masterly work of Tudor history that is engrossing, sympathetic, suspenseful, and illuminating' Charlotte Gordon, author of Romantic Outlaws

Gareth Russell read Modern History at St Peter's College at the University of Oxford and completed his postgraduate at
Queen's University, Belfast with a study of Catherine Howard's household. He has written for the Sunday Times, Tatler and the Irish News and is the author of two novels set in his native Belfast and several books on royal history. He divides his time between Belfast and New York.