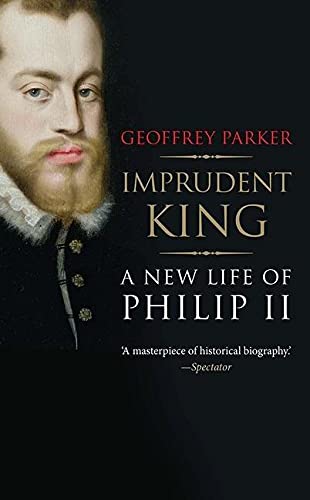 A vast archive of documents, unread since the sixteenth century, revises the portrait of Spain's best-known king

Philip II is not only the most famous king in Spanish history, but one of the most famous monarchs in English history: the man who married Mary Tudor and later launched the Spanish Armada against her sister Elizabeth I. This compelling biography of the most powerful European monarch of his day begins with his conception (1526) and ends with his ascent to Paradise (1603), two occurrences surprisingly well documented by contemporaries. Eminent historian Geoffrey Parker draws on four decades of research on Philip as well as a recent, extraordinary archival discovery-a trove of 3,000 documents in the vaults of the Hispanic Society of America in New York City, unread since crossing Philip's own desk more than four centuries ago. Many of them change significantly what we know about the king.

The book examines Philip's long apprenticeship; his three principal interests (work, play, and religion); and the major political, military, and personal challenges he faced during his long reign. Parker offers fresh insights into the causes of Philip's leadership failures: was his empire simply too big to manage, or would a monarch with different talents and temperament have fared better?
Parker's highly detailed but also immensely readable book has come far closer to that than any previous account of the most enigmatic of Spanish kings.-Anthony Pagden, New York Times Book Review on The Grand Strategy of Philip II

He is at pains to know Philip through the testimony of his friends, foes, courtiers and his own words and this authoritative, intelligently revisionist biography must stand now as the primary reference.-Iain Finlayson, Times

Parker has managed to navigate the archival whirlpools with remarkable flair. His admiration for his subject is evident on almost every page, yet the book is no whitewash. We are constantly made aware of the possibility that Philip might be deceiving us.-Fernando Cervantes, TLS

[T]he world's outstanding historian of Philip II, his court, his problems and tragedies . . . Imprudent King is readable and broad-minded, as well as being scholarly . . . Parker has given us a really magnificent biography, whose documentation is impeccable while never heavy.-Hugh Thomas, The Spectator

Geoffrey Parker's biography of Philip II of Spain is superb.-Jonathan Wright, The Tablet

An up-to-date and very readable biography that helps explain just why this monarch cast such an enduring shadow over his age.-Christopher Storrs, BBC History

There is no Anglophone historian who knows more about Philip II than Geoffrey Parker. In this soaring biography, which draws on a cache of recently discovered documents as well as the enormous back catalogue of archival deposits, he paints a compelling, even-handed portrait of the most powerful man in 16th-century Europe. Parker informs us that Philip's handwriting is hard to read. It is no easier to decipher his legacy. It seems that he didn't kill his son Don Carlos (whatever the Verdi opera tries to tell you) but he was not averse to removing other obstacles. He continues to fascinate -- if you are in the market for a nuanced study bolstered by a lifetime of study, Parker is your man and this is, for me, the historical biography of the year.-Jonathan Wright, The Herald (Scotland)

Highly recommended . . . has plenty of sound content while being highly readable.-Brian Buxton, Journal of the Tyndale Society

Selected as an Outstanding Academic Title 2015 by Choice

The first global empire, a master historian, and a wealth of new archival documents provide the essential elements for this terrific biography of Philip II as both statesman and man. Parker has brought Philip to life and, with him, the challenges of ruling an early modern empire.-Stuart Schwartz, author of All Can Be Saved: Religious Tolerance and Salvation in the Iberian Atlantic World

Geoffrey Parker, one of the world's leading early modern scholars and, most certainly, the greatest authority on Philip II, has written a remarkable, erudite, thoroughly researched, and thoughtful book. Imprudent King benefits from the exhaustive research undertaken for his monumental, 'definitive' study of Philip II published in Spanish, but Parker's deployment of close to 3,000 new documents permits a very different understanding of Philip II's successes and failures. This, together with Parker's unique gift as a historian, makes Imprudent King a profound, original and engaging new interpretation of the king's life and of the manner in which he wrestled with the almost hopeless task of managing the first truly world empire.-Teofilo F. Ruiz, author of Spanish Society, 1400-1600