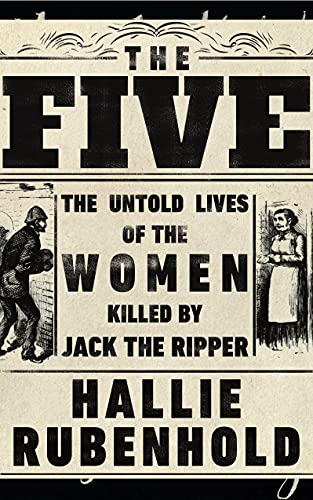 The Five: The Untold Lives of the Women Killed by Jack the Ripper Hallie Rubenhold

THE #1 SUNDAY TIMES BESTSELLER
WINNER OF THE BAILLIE GIFFORD PRIZE FOR NONFICTION 2019
'An angry and important work of historical detection, calling time on the misogyny that has fed the Ripper myth. Powerful and shaming' GUARDIAN

Polly, Annie, Elizabeth, Catherine and Mary-Jane are famous for the same thing, though they never met. They came from Fleet Street, Knightsbridge, Wolverhampton, Sweden and Wales. They wrote ballads, ran coffee houses, lived on country estates, they breathed ink-dust from printing presses and escaped people-traffickers.

What they had in common was the year of their murders: 1888.

Their murderer was never identified, but the name created for him by the press has become far more famous than any of these five women.

Now, in this devastating narrative of five lives, historian Hallie Rubenhold finally sets the record straight, and gives these women back their stories.

WINNER OF THE GOODREADS HISTORY BOOK OF THE YEAR 2019

PRAISE FOR THE FIVE

'Speaks with an urgency and passion to our own times' STIG ABELL, Chair of Baillie Gifford Prize

'At last, the Ripper's victims get a voice... An eloquent, stirring challenge to reject the prevailing Ripper myth.' MAIL ON SUNDAY

'Devastatingly good. The Five will leave you in tears, of pity and of rage.' LUCY WORSLEY

'What a brilliant and necessary book' JO BAKER, author of Longbourn

'Beautifully written and with the grip of a thriller, it will open your eyes and break your heart.' ERIN KELLY

'An outstanding work of history-from-below ... magnificent' THE SPECTATOR

FIVE STARS: At last, the Ripper's victims get a voice... An eloquent, stirring challenge to reject the prevailing Ripper myth. -- Gwen Smith * Mail on Sunday *
How fitting that in the year when we celebrate the 100th anniversary of women's suffrage, dignity is finally returned to these unfortunate women. * Professor Dame Sue Black, author of ALL THAT REMAINS *
A Ripper narrative that gives voice to the women he silenced; I've been waiting for this book for years. Beautifully written and with the grip of a thriller, it will open your eyes and break your heart. * Erin Kelly, author of HE SAID/SHE SAID *
What a brilliant and necessary book * Jo Baker, author of LONGBOURN *
Devastatingly good. The Five will leave you in tears of pity and of rage. * LUCY WORSLEY *
Forests have been felled in the interests of unmasking the murderer, but until now no one has bothered to discover the identity of his victims. The Five is thus an angry and important work of historical detection, calling time on the misogyny that has fed the Ripper myth. . . This is a powerful and a shaming book, but most shameful of all is that it took 130 years to write. -- Frances Wilson * Guardian *
By collating these five deeply affecting biographies ... Rubenhold has given these women the immortality that their murderer does not deserve. * Daily Mail *
Stupendous. The sort of work that keeps history vital. * IMOGEN HERMES GOWAR, author of THE MERMAID AND MRS HANCOCK *
Fascinating, compelling, moving, The Five makes a fierce, passionate argument about the ethics of how we engage with murder. A brilliant,properly thoughtful, responsible piece of political writing. * BRIDGET COLLINS, author of THE BINDING *
'Mary Ann Nichols, Annie Chapman, Elizabeth Stride, Catherine Eddowes, and Mary Jane Kelly deserve to be thought of as more than eviscerated bodies on an East London street. This haunting book does something to redress that balance. * Sunday Times *
A highly readable work of rigorous scholarship that plunges the reader into the claustrophobic world of late 19th-century London... The story of these five women - Mary Ann "Polly" Nichols, Annie Chapman, Elizabeth Stride, Catherine Eddowes and Mary Jane Kelly - is not one of death, but one of life. -- Rebecca Rideal * NewStatesman *
A Sunday Times must-read. * Sunday Times *
Fascinating and hugely important book acts as a timely reminder of what happens when society ceases to care for its most vulnerable residents. * Herald Scotland *
This confidently written book gives a rich insight into the world of the wretched in the late Victorian period. Rubenhold writes in a compassionate but unsentimental style... * Literary Review *
An outstanding work of history-from-below ... magnificent * The Spectator *
Urges us to look beyond the familiar stories... The Five challenges the accepted view of the five canonical victims of Jack the Ripper, and tells the untold stories of their lives. * History Revealed *
THE FIVE has received deservedly rave reviews. It's gripping. * New York Times *
A brilliant and important book that will reshape how this case is studied - anyone interested in social history or the history of crime owes a debt to @HallieRubenhold * EMMA FLINT *
Becomes a passionate indictment of the true-crime genre, with its fixation on the minds of murderers and its shallow, glancing sympathy for the dead. Hard-edged and heartbreaking * Washington Post *
Our fascination with true crime means we often focus on the perpertrator, such as Ted Bundy, rather than the victims. It's time to stop focusing on the killer and start remembering the victims: Polly, Annie, Catherine and Mary-Jane * Stylist *
Hallie Rubenhold is the Number One Sunday Times bestselling and Baillie Gifford Non-Fiction prize-winning social historian whose expertise lies in revealing stories of previously unknown women and episodes in history. As well as The Covent Garden Ladies, Rubenhold's works of non-fiction include the award-winning and Number One bestselling The Five: The Untold Lives of the Women Killed by Jack the Ripper and Lady Worsley's Whim, dramatized by the BBC as 'The Scandalous Lady W'. Her latest work of non-fiction, Bad Women, the story of the disappeared wives and partner of Dr Crippen, is due to be published in 2022. She has also written two acclaimed novels Mistress of My Fate and The French Lesson which are a feminist homage to the literary tropes of the Eighteenth Century. She lives in London with her husband. Meet her @HallieRubenhold
GOR009716326
9780857524485
0857524488
The Five: The Untold Lives of the Women Killed by Jack the Ripper Hallie Rubenhold
Hallie Rubenhold
Gebraucht - Sehr Gut
Gebundene Ausgabe
Transworld Publishers Ltd
2019-02-28
432
N/A
Die Abbildung des Buches dient nur Illustrationszwecken, die tatsächliche Bindung, das Cover und die Auflage können sich davon unterscheiden.
Dies ist ein gebrauchtes Buch. Es wurde schon einmal gelesen und weist von der früheren Nutzung Gebrauchsspuren auf. Wir gehen davon aus, dass es im Großen und Ganzen in einem sehr guten Zustand ist. Sollten Sie jedoch nicht vollständig zufrieden sein, setzen Sie sich bitte mit uns in Verbindung.