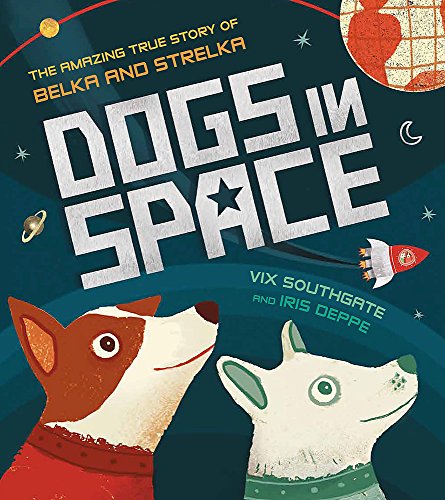 Dogs in Space: The Amazing True Story of Belka and Strelka Iris Deppe

Science, survival and dogs in spacesuits - the incredible true story of Belka and Strelka, the Soviet space dogs.

Dogs in Space: The Amazing True Story of Belka and Strelka Iris Deppe

Meet Belka and Strelka, the two dogs who changed the face of space history and became international celebrities in the process!

In 1960, two stray dogs were plucked from the streets of Moscow to become space pioneers.

This quirky and delightful picture book tells the incredible true story of these heroic strays. Selected from a number of potential canine cosmonauts, Belka and Strelka are put through their paces on the ground, as they practice rocket simulations and wearing spacesuits, before being launched into outer space as the first ever living creatures to successfully orbit the Earth.

Miraculously, the dogs survive the mission and upon their return embark on a tour of the USSR, clad in their carefully tailored jumpsuits - one red, one green - becoming international celebrities. As for their legacy, less than a year after their safe return the Soviet space programme felt confident enough to send the first human into space.

I love the way the story is told, with the two character-full dogs at is very heart - and superbly depicted by Iris Deppe in evocative pictures * Parents in Touch *
Victoria Southgate (Author)
Debut author Vix Southgate has a passion for all aspects of space exploration. She has worked with the British Council, researching and writing about Russian achievements in space, and is a leading expert on Yuri Gagarin. She is the developer of CASSiE - a creative marketing initiative to help engage children with the wonders of space, spaceflight and exploration. She also manages World Space Week for the UK (every October 4-10), works closely with astronauts and cosmonauts, and is the European Agent to Apollo 15 NASA Astronaut, Col Al Worden.

Iris Deppe (Illustrator)
Iris Deppe is an accomplished illustrator and graphic designer whose work has featured in books, magazines and newspapers as well as on album covers, music posters and t-shirts. She is the illustrator of Little Bell and the Moon, a beautiful picture book that introduces children to the most difficult of topics with warmth, positivity and humour. Iris's artwork reflects her passions and interests, including animals, the 60's and 70's and bright, primary colours.