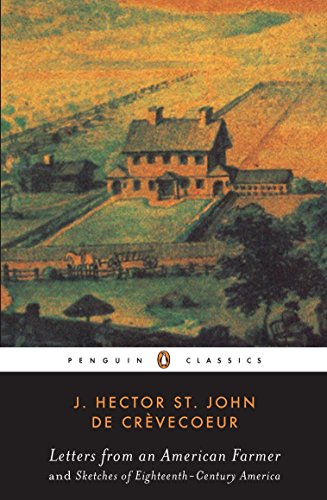 American literature, as the voice of our national consciousness, begins with the works of Crevecoeur.

Published in 1782, "Letters from an American Farmer" painted a vivid portrait of the American scene, from New England seafaring life to Southern plantation culture. More popular abroad than at home, the work provided Europeans with their chief impression of American landscapes, peoples, institutions, values, and problems. In "Sketches of Eighteenth-Century America" Crevecoeur explored some of the unpleasant truths about the nation's birth pangs. These essays described the hardships of frontier life, the threat of Indian raids, and the bloody unrest between fanatical patriots and back-country loyalists.

J. Hecor St. John de Cr vecoeur was born in France in 1735 and emigrated to the English colony of New York after the French and Indian War. Suspected by his neighbors of being a monarchy sympathizer during the American Revolution, Crevecoeur was unjustly persecuted, imprisoned, and forced to flee the colonies. His well-received 1781 publication Letters from an American Farmer led him to be awarded a consulship to the newly formed American republic, where he served as a political and cultural liaison between France and the US, helped to organize and promote trade across the Atlantic, and corresponded with the likes of Franklin, Jefferson, and Madison. He died in France in 1813.

Albert E. Stone is a professor of English and chairman of the American Studies program at the University of Iowa. He is the author of The Innocent Eye: Childhood in Mark Twain's Imagination and the editor of The American Autobiography: A Collection of Critical Essays, as well as Twentieth-Century Interpretations of The Ambassadors.