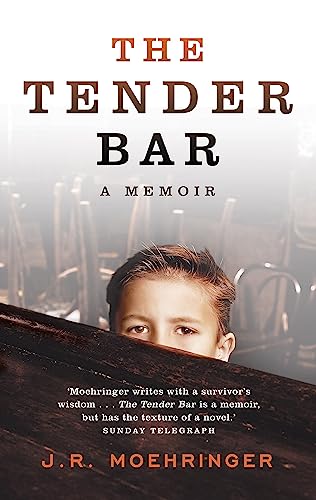 In the tradition of THIS BOY'S LIFE and THE LIAR'S CLUB, a raucous, poignant, luminously written memoir about a boy striving to become a man, and his romance with a bar.

In the rich tradition of bestselling memoirs about self-invention, The Tender Bar is by turns riveting, moving, and achingly funny. An evocative portrait of one boy's struggle to become a man, it's also a touching depiction of how some men remain lost boys.

JR Moehringer grew up listening for a voice, the voice of his missing father, a DJ who disappeared before JR spoke his first words. As a boy, JR would press his ear to a battered clock radio, straining to hear in that resonant voice the secrets of identity and masculinity. When the voice disappeared, JR found new voices in the bar on the corner. A grand old New York saloon, the bar was a sanctuary for all sorts of men -- cops and poets, actors and lawyers, gamblers and stumblebums. The flamboyant characters along the bar taught JR, tended him, and provided a kind of fatherhood by committee. Torn between his love for his mother and the lure of the bar, JR forged a boyhood somewhere in the middle.

When the time came to leave home, the bar became a way station -- from JR's entrance to Yale, where he floundered as a scholarship student; to Lord & Taylor, where he spent a humbling stint peddling housewares; to the New York Times, where he became a faulty cog in a vast machine. The bar offered shelter from failure, from rejection, and eventually from reality, until at last the bar turned JR away.