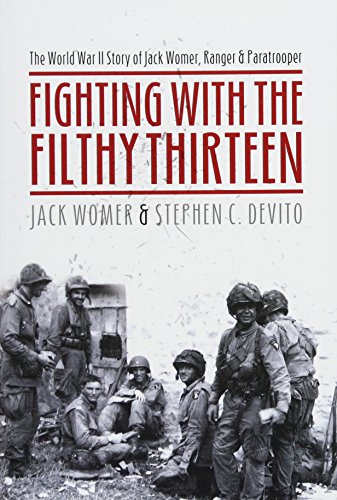 Action-packed account of fighting with the Filthy Thirteen as a spearhead of 101st Airborne in Normandy, Market Garden, and Battle of the Bulge by one of the squad's integral members.

In recent years the public has become aware of the Filthy Thirteen, the most notorious squad of fighting men in the 101st Airborne Division, and the true-life inspiration for the movie The Dirty Dozen. They became singular within the Screaming Eagles for their hard drinking, and savage fighting skill - and that was only in training. Just prior to the invasion of Normandy, a Stars and Stripes photographer caught U.S. paratroopers with heads shaved into Mohawks, applying war paint to their faces. Unknown to the public at the time, these men were the Filthy 13. In this long awaited work one of the squad's integral members-and probably its best soldier-reveals his own inside account of fighting as a spearhead of the Screaming Eagles in Normandy, Market Garden, and the Battle of the Bulge. Jack Womer was originally a member of the 29th Infantry Division and was selected to be part of its elite Ranger battalion. But after a year of grueling training under the eyes of British Commando instructors, the 29th Rangers were suddenly dissolved. Bitterly disappointed, Womer asked for transfer to another elite unit, the Screaming Eagles, where room was found for him among the division's most miscreant squad of brawlers, drunkards, and misfits. Beginning on June 6, 1944, however, the Filthy Thirteen began proving themselves more a menace to the German Army than they had been to their own officers and the good people of England, embarking on a year-of ferocious combat at the very tip of the Allied advance in Europe. From parachuting behind German lines on D-Day to the gritty defense of Bastogne, Womer fought beyond the breaking point of the soldiers around him. In this work, with the help of Stephen DeVito, Jack provides an amazingly frank look at close-quarters combat in Europe, as well as the almost surreal experience of dust-bowl-era GI's entering country after country in their grapple with the Wehrmacht, finally ending up in Hitler's mountaintop lair in Germany itself. Throughout his fights, Jack Womer credited his Ranger/Commando training for helping him to survive, even though most of the rest of the Filthy Thirteen did not.
This is a very personal account of some tough men facing tough combat, giving a good feel for infantry action at squad level. * Miniature Wargames - Chris Jarvis *
Jack Womer's story is entertaining, honest and forthright, just like the man. He does not shrink from describing what actually happened although occasionaly one suspects just a hint of artistic licence. However, there is nothing which is unbelievable given the chaotic and random nature of war. * Army Rumour Service *
Jack Womer was a World War II veteran of high distinction. Jack was drafted into the 29th Infantry Division in April of 1941, and sent to Europe in October of 1942. Jack volunteered for the 29th Ranger Battalion, undertook training by British Commandos, and was among the relatively few men who met the extensive and rigorous requirements for becoming a Ranger. After the 29th Rangers disbanded in October of 1943, Jack volunteered to become a paratrooper with the 101st Airborne Division and, in January, 1944, was assigned to the Division's 506th Parachute Infantry Regiment's Demolitions Platoon, in the section known infamously as theFilthy Thirteen. He fought with the Filthy Thirteen in the Invasion of Normandy (D-Day), the Battle for Holland, and the Battle of the Bulge. Arguably the Filthy Thirteen's best soldier, Jack credits his not being injured and surviving the war to his Ranger training and God. Jack was eventually made buck sergeant of the Filthy Thirteen, a position which he held until the end of the war. He passed away in 2013. Stephen C. DeVito, born and raised on Long Island, New York, has lived with his family in Chantilly, Virginia since 1989. He has a Ph.D. in Pharmaceutical Sciences, and is a scientist by profession. For many years Steve has maintained a strong interest in U.S. military history, particularly the Civil War and World War II, researching and writing several projects.
GOR010245484
9781612005645
1612005640
Fighting with the Filthy Thirteen: The World War II Story of Jack Womer - Ranger and Paratrooper Jack Womer
Jack Womer
Gebraucht - Sehr Gut
Broschiert
Casemate Publishers
20180131
312
null null null null null null null null null null
Die Abbildung des Buches dient nur Illustrationszwecken, die tatsächliche Bindung, das Cover und die Auflage können sich davon unterscheiden.
Dies ist ein gebrauchtes Buch. Es wurde schon einmal gelesen und weist von der früheren Nutzung Gebrauchsspuren auf. Wir gehen davon aus, dass es im Großen und Ganzen in einem sehr guten Zustand ist. Sollten Sie jedoch nicht vollständig zufrieden sein, setzen Sie sich bitte mit uns in Verbindung.