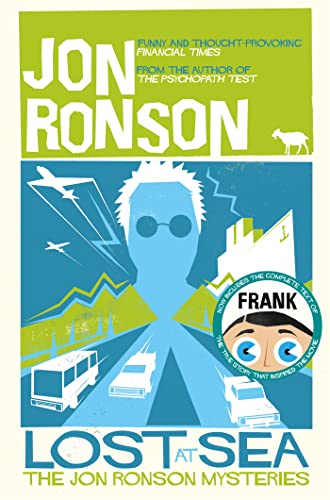 A collection of mini-adventure stories from the Sunday Times bestselling author of The Psychopath Test. Now including two extra stories.

Frequently hilarious, sometimes disturbing, always entertaining, these fascinating stories of the chaos that lies on the fringe of our daily lives will have you wondering just what we're capable of.

This updated edition of Lost at Sea includes the complete text of Frank: The True Story that Inspired the Movie.

Jon Ronson has been on patrol with America's real-life superheroes and to a UFO convention in the Nevada desert with Robbie Williams. He's met a man who tried to split the atom in his kitchen and asked a conscious robot if she's got a soul.

Fascinated by madness, strange behaviour and the human mind, Jon has spent his life exploring mysterious events and meeting extraordinary people. Collected from various sources (including the Guardian and GQ) Lost at Sea features the very best of his adventures.

Portions of this book have appeared previously, in slightly different form, in Out of the Ordinary, What I Do, the Guardian and GQ.