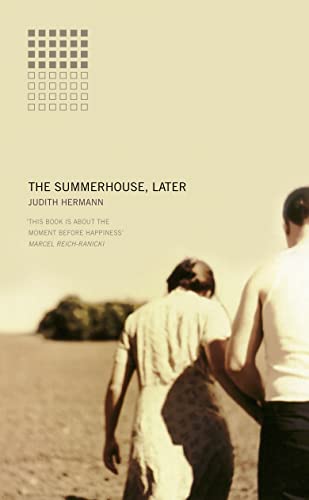 the bestselling voice of the new Berlin

the bestselling voice of the new Berlin

`This book is about the moment before happiness'
Marcel Reich-Ranicki

At long last, there is a very stimulating, stylish, entertaining new generation of German authors just emerging who are keen to tell good stories and have very good stories to tell, stories that will travel, stories that are not about the war, stories that are not paralysed by introspection. And the hottest young star of them all is Judith Hermann. Her debut, The Summerhouse, Later, has been the literary sensation of the year in Germany; so far it has sold over 200,000 copies. Hermann herself is an enigmatic, charismatic, sad-eyed creature whose languid manner and idiosyncratic remarks have only contributed to her aura. She's quite something - dare I say the German Zadie Smith? And her book is principally set in what must be the most exciting city in Europe right now - Berlin; and it's about an entirely new, young breed of German, possessed of a kind of attitude that that country has never seen before.

This is the first time in ten years that Flamingo has cared this much about anything in German. The book itself is sly, measured, chic, moving and reflective - imagine a Geman version of Jhumpa Lahiri's Interpreter of Maladies (of which we've now sold over 40,000 copies in B-format).

'An elegant and perceptive reading on the emptiness that fills our lives. Its author is a master storyteller.' Independent

'A collection of striking distinction and poise. Some of the stories touch on brilliance. She can rival the best contemporary exponents of short fiction. Exceptional.' Sunday Business Post

'Cool... told without sentimentality, drawing power from the precision of the language and from a laconic style that narrates but refuses to explain... a world of contingent events and casual relationships where happiness is experienced as memory or aspiration but never as present reality.'
Peter Graves, TLS

judith hermann is 30. This is her first book. She lives in Berlin. Her German reviews were amazing:
'Hermann's prose has conviction and is utterly of its time...' Peter Henning, Focus

'Her characters reside in a place beyond time. As if out of nowhere, they suddenly appear; stay for a few days or a week and then disappear: some without trace, others leaving behind the shadow of pain. As one character says, I come and stay, and then move on. How else should it be?' ... The book has an irresistible power... No word is too much and none out of place.' Neue Zurcher Zeitung