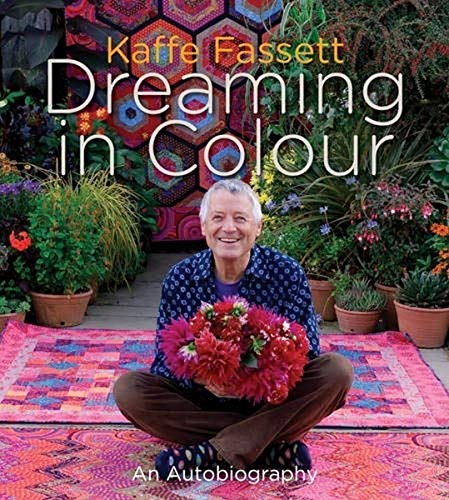 An intimate look at the fascinating life and extraordinary work of a creative visionary, told through stories, art, and photographs.

Kaffe Fassett has led an extraordinary life and is a captivating storyteller with a vivid memory. Born in 1937 in San Francisco, he spent much of his youth in Big Sur, where his parents bought a log cabin from Orson Welles and transformed it into the world-famous Nepenthe restaurant, a gathering place of artists of all sorts (Kaffe has many stories to tell about mingling with the likes of Olivia de Havilland, Elizabeth Taylor, and Henry Miller). After attending a boarding school run by the disciples of Krishunamurti, an Indian guru, he studied painting on scholarship at the School of the Museum of Fine Arts in Boston, but left after less than one year and traveled to England, where he ultimately made his home. After struggling to make a living as a fine artist for several years, Fassett met the fashion designer Bill Gibb and began designing knitwear for his collection. He went on to design knitwear for Missoni and for private clients like Lauren Bacall, Shirley MacLaine, and Barbra Streisand, and to revolutionise the hand knitting world with his explosive use of colour. Further explorations led him to needlepoint, mosaics, rug-making, yarn and fabric design, set design and quilting. Now in his 70s, Fassett continues to produce new work in his studio in London and to travel worldwide to teach and lecture. This intimate autobiography is lavishly filled with Fassett's amazing stories about his bohemian childhood, his hard-earned rise to fame, and all of his creative pursuits. It includes photos of him throughout his life (including his stint as a model in Paris), his home (which is an artwork in itself), his work (everything from childhood drawings to pencil sketches, to oil paintings, to massive tapestries and set designs, to hand knits and quilts) as well as the people and places around the world that have inspired him.
Kaffe Fassett, an accomplished painter and designer of textiles, is widely acknowledged as a visionary in the use of colour. In 1988 he was honoured to become the first living textile designer to be given a one-person show at the Victoria & Albert Museum in London. Since then, the exhibition of his textiles has travelled the world with him as he has taught and inspired others. He is a fabric designer for Rowan Patchwork and Quilting and the primary knitwear designer for Rowan Yarns. He is the author of 15 books, including STC Craft's Simple Shapes Spectacular Quilts. Visit his website at www.kaffefassett.com
GOR008541040
9781617690075
1617690074
Kaffe Fassett Dreaming in Colour: An Autobiography Kaffe Fassett
Kaffe Fassett
Gebraucht - Wie Neu
Gebundene Ausgabe
Stewart, Tabori & Chang Inc
2012-09-15
224
N/A
Die Abbildung des Buches dient nur Illustrationszwecken, die tatsächliche Bindung, das Cover und die Auflage können sich davon unterscheiden.
Das Buch wurde gelesen, ist aber in gutem Zustand. Alle Seiten sind intakt, der Einband ist unversehrt. Leichte Gebrauchsspuren am Buchrücken. Das Buch wurde gelesen, sieht jedoch noch wie neu aus. Der Bucheinband weist keine sichtbaren Gebrauchsspuren auf. Gegebenenfalls ist auch ein Schutzumschlag verfügbar. Keine fehlenden oder beschädigten Seiten, keine Risse, eventuell minimale Knicke, keine unterstrichenen oder markierten Textstellen, keine beschrifteten Ränder.