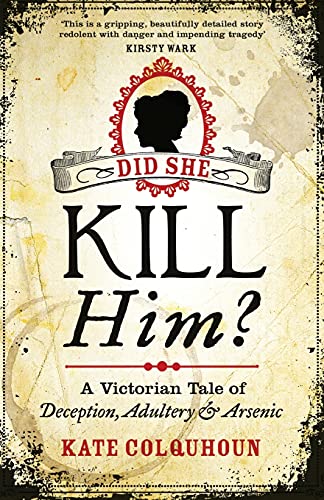 Did She Kill Him? Kate Colquhoun

Did She Kill Him?: A Victorian tale of deception, adultery and arsenic Kate Colquhoun

In the summer of 1889, young Southern belle Florence Maybrick stood trial for the alleged arsenic poisoning of her much older husband, Liverpool cotton merchant James Maybrick.

'The Maybrick Mystery' had all the makings of a sensation: a pretty, flirtatious young girl; resentful, gossiping servants; rumours of gambling and debt; and torrid mutual infidelity. The case cracked the varnish of Victorian respectability, shocking and exciting the public in equal measure as they clambered to read the latest revelations of Florence's past and glimpse her likeness in Madame Tussaud's.

Florence's fate was fiercely debated in the courtroom, on the front pages of the newspapers and in parlours and backyards across the country. Did she poison her husband? Was her previous infidelity proof of murderous intentions? Was James' own habit of self-medicating to blame for his demise?

Historian Kate Colquhoun recounts an utterly absorbing tale of addiction, deception and adultery that keeps you asking to the very last page, did she kill him?

Kate Colquhoun's account of the Maybrick case is brilliantly detailed - her knowledge of the uses and misuses of poison would put that of many pharmacists to shame -- Rachel Cooke * Observer *
The case is thrilling, the trial harrowing and Colquhoun does them justice -- Laura Freeman * Daily Mail *
A perfect mirror of mid-Victorian morality * Saga *
Kate Colquhoun's fascinating history . . . critiques thoroughly and carefully the attitudes of the time * Scotsman *
Lapping up the court reports, our forbears were "entertained and delighted". Present-day readers will feel the same * Independent *
[An] intriguing and forensic book * The Times *
A story rich in atmosphere * Good Book Guide *
A real-life case as thrilling as any crime novel * Daily Record *
This is a gripping, beautifully detailed story redolent with danger and impending tragedy -- Kirsty Wark
Accomplished biographer and social commentator Kate Colquhoun is taking on Victorian murder in Did She Kill Him? Conveying the hypocrisy and claustrophobia of middle-class life at the time it is likely to hit the spot with anyone who was intrigued by The Suspicions of Mr Whicher * Daily Express - Top titles for 2014 *
With deliciously dark elements of addiction, deception, torrid adultery and poison, this is the riveting true story of a sensational Victorian trial of 1889 . . . Colquhoun's writing has a wonderful slow burn to it, and until the final page, she keeps us guessing: guilty, or not guilty? * Bookseller *
Exhaustively researched and not for the faint-hearted. Her descriptions of the autopsy carried out in the victim's bedroom would make Kay Scarpetta wince . . . But there is another element that Colquhoun hauls blinking into the light: the changing moral climate of the time and the conflict between the patriarchal ancien regime and the emergence of the New Woman * Daily Express *
Sensibly, if tantalisingly, Kate Colquhoun offers no final answers in her absorbing review of this old scandal . . . she highlights what the case can tell us about late Victorian England - its flawed legal processes and dangerous medical practices, its predatory appetite for gossip, and above all the uncertain position of its women. What Colquhoun reveals is a persistent doubleness - respectability concealing transgression . . . Restlessness, rather than complacency, characterises the society that she describes * Guardian *
Intriguing, forensic . . . a moral fable of the age, intelligently told by Colquhoun, who places her sources cleverly within historical and literary context . . . gripping * The Times *
While [Did She Kill Him] is a carefully researched account, based on contemporary sources, it reads more like a novel * Liverpool Echo *
[Colquhoun] builds an almost unbearable tension into the events . . . This book is much more than a real-life murder mystery. Colquhoun has researched her subject thoroughly and presents a forensic account of the facts as known . . . Colquhoun spins a tale rich in detail and atmosphere, and her meticulous research never overshadows her obvious talent for storytelling * Herald *
Kate Colquhoun has complicated and fascinating story to tell. She has researched the case well, reading the original trial transcripts and contemporary newspaper reports in addition to the many previous accounts of the Maybrick case * Literary Review *
Meticulously researched, this vivid account follows every twist and turn of the case that's threaded with adultery, poison and addiction. It kept me guessing to the end * Woman & Home *
Colquhoun's account . . . is vivid and shocking . . . giving us a keyhole through which to peep into an era when gender relations were almost as toxic as the pick-me-ups that probably killed James [Maybrick] -- Lucy Hughes-Hallett * Sunday Times *
Colquhoun presents an absorbing picture of a society which would rather hang a woman, despite lack of evidence, than besmirch her husband's name * Press Association *
A fascinating, meticulously researched book, full of period detail. Colquhoun's success in weaving together a series of complex topics is no mean feat and an even greater achievement is to have presented them clearly and simply * Spectator *
Kate Colquhoun renders the story in a vivid, novelistic style . . . gripping * Financial Times *
A fascinating tale -- Craig Brown * Mail on Sunday *
Enlivened by imaginative detail, Colquhoun's lively and perceptive narrative has the reader rooting for the friendless defendant * Independent *
Kate Colquhoun's previous non-fiction titles were shortlisted for the Duff Cooper Prize 2004 and longlisted for the Samuel Johnson Prize 2004. Her most recent books were both shortlisted for the CWA Daggers: Non-fiction Prize: Mr Briggs' Hat in 2011 and Did She Kill Him? in 2014. As well as writing for several newspapers and magazines, she appears regularly on national radio and television. She lives in London with her two sons.
GOR006450227
9780349138565
0349138567
Did She Kill Him?: A Victorian tale of deception, adultery and arsenic Kate Colquhoun
Kate Colquhoun
Gebraucht - Wie Neu
Broschiert
Little, Brown Book Group
2015-01-15
432
Short-listed for CWA Daggers: Non-fiction 2014 (UK)
Die Abbildung des Buches dient nur Illustrationszwecken, die tatsächliche Bindung, das Cover und die Auflage können sich davon unterscheiden.
Das Buch wurde gelesen, ist aber in gutem Zustand. Alle Seiten sind intakt, der Einband ist unversehrt. Leichte Gebrauchsspuren am Buchrücken. Das Buch wurde gelesen, sieht jedoch noch wie neu aus. Der Bucheinband weist keine sichtbaren Gebrauchsspuren auf. Gegebenenfalls ist auch ein Schutzumschlag verfügbar. Keine fehlenden oder beschädigten Seiten, keine Risse, eventuell minimale Knicke, keine unterstrichenen oder markierten Textstellen, keine beschrifteten Ränder.