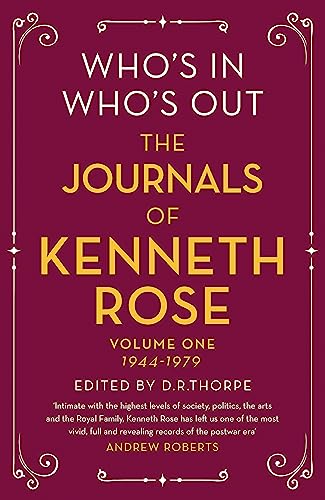 The wry and amusing journals of royal biographer and Sunday Telegraph journalist Kenneth Rose, one of the most astute observers of the Establishment in mid 20th-century Britain.

'The most detailed, amusing and accurate account ever of the post-war world of the English Establishment' William Shawcross, Daily Telegraph
'Extremely entertaining' Jane Ridley, Literary Review

Kenneth Rose was one of the most astute observers of the establishment for over seventy years. The wry and amusing journals of the royal biographer and historian made objective observation a sculpted craft.

His impeccable social placement located him within the beating heart of the national elite for decades. He was capable of writing substantial history, such as his priceless material on the abdication crisis from conversations with both the Duke of Windsor and the Queen Mother. Yet he maintained sufficient distance to achieve impartial documentation while working among political, clerical, military, literary and aristocratic circles. Relentless observation and a self-confessed difficulty 'to let a good story pass me by' made Rose a legendary social commentator, while his impressive breadth of interests was underpinned by tremendous respect for the subjects of his enquiry.

Brilliantly equipped as Rose was to witness, detail and report, the first volume of his journals vividly portrays some of the most important events and people of the last century, from the bombing of London during the Second World War to the election of Margaret Thatcher, Britain's first woman Prime Minister, in 1979.

Intimate with the highest levels of society, politics, the arts and the Royal Family, Kenneth Rose has left us one of the most vivid, full and revealing records of the post-war era -- Andrew Roberts
A huge treat ... [T]he first volume of Rose's journals, covering 1944-79, will also delight anyone who enjoys the great English diarists - Samuel Pepys, Chips Channon, Harold Nicolson, James Lees-Milne, Alan Clark. Who's In, Who's Out offers a feast of the choicest gossip from highest society -- Lewis Jones * Sunday Telegraph *
A fascinating insight into postwar society at the highest level and an intimate view of many of the key players ... Dip into the book at random and you often pull out a plum -- Patrick Kidd * The Times *
[A]n astonishing and enjoyable collection of anecdotes, observations and judgements ... D.R. Thorpe, himself a gifted biographer and a friend of Rose for 40 years, has edited the raw materials tactfully and with a light touch ... Thorpe, like Rose, has a well-tuned ear for anecdote; and one can open this volume almost at random and be sure to find a jolly story ... [A]nyone who wants to understand the British establishment in the decades after the war should treat these diaries as their primer. The reader moves effortlessly through embassies and drawing rooms, not to mention palaces ... It is a spectator's diary, albeit written from the best possible seats in the ground -- Simon Heffer * Daily Telegraph *
An insider's account, this gossipy and acute diary will become the indispensable guide to the Establishment in the years between 1944 and 1979 -- Jane Ridley * The Spectator Books of the Year *
The diaries, chronicling the events of previous generations, give a unique glimpse of the personalities and preoccupations of the statesmen of that time. Harold Macmillan, Rab Butler, amongst other figures, are shown in a different and more informal way than their biographers have done and the differences in their approach to politics and each other are amusingly revealed -- Lord Carrington, Foreign Secretary 1979-82
The most detailed, amusing and accurate account ever of the post-war world of the English Establishment -- William Shawcross * Daily Telegraph *
[S]o full of riveting detail that you can't help wondering how much of the juiciest gossip was left out of the Albany column and saved for the journals -- Andrew M. Brown * Catholic Herald *
[G]reat fun to read ... Rose has a good eye for colourful detail ... [The diaries] illuminate history and give it life. If one cannot be there oneself then Rose provides as good an apparatus for eaves-dropping as can well be conceived. He deserves our gratitude -- Philip Ziegler * The Spectator *
As a history of the Establishment in the second half of the 20th century, these journals will become indispensable and definitive. They are the equivalent for that period of the journals of Harold Nicolson and Chips Channon for the first half, combining sharp observation and anecdote with political and social insights. They are also extremely entertaining. Rose was right to think that they were his most important and lasting contribution. D. R. Thorpe has done a great job of editing them. He has a light touch. In spite of being an authority on the period, having written great biographies of Macmillan and Alec Douglas-Home, he makes no attempt to fill the page with footnotes, but allows Rose to speak directly to the reader -- Jane Ridley * Literary Review *
Rose was an impeccably connected biographer and gentleman journalist ('Albany' in the Sunday Telegraph for many years) and the joys of his diaries are choice anecdotes, pithily recounted, and plenty of culinary detail -- Gyles Brandreth * The Oldie *
These journals kept by the royal biographer and journalist Kenneth Rose - who liked nothing so much as to dine in a London club with someone in the know about the world of high politics or royalty - make highly amusing and enlightening reading. Rose jotted down the juiciest gossip and the best anecdotes ... The journal entries are never more than a short paragraph long: ideal bedtime reading for anyone who relishes the unguarded utterances of the rich and well-connected -- Ysenda Maxtone Graham * Daily Mail *
What is so good - and is so well brought out in D.R.Thorpe's edition - is that [Kenneth Rose] was master of his material. This was the British establishment ... his diaries compose accurate, fair-minded history ... As Kenneth's editor in the later years of his Albany column, I was irritated by his fault (quite the opposite of most of us journalists) of putting into his articles less than he knew. This is corrected in his Journals. He knew a lot and he put it in; and now we can read it. -- Charles Moore * THE SPECTATOR *

Kenneth Rose was born in 1924. He was educated at Repton and was a scholar at New College, Oxford. He served in the Welsh Guards during the Second World War and was subsequently a schoolmaster at Eton, before working for the British Council in Rome and Naples. He joined the Daily Telegraph in 1951 and worked on the Peterborough column before starting the long-running Albany at Large column in the Sunday Telegraph in 1961. He published prize-winning biographies of Lord Curzon, King George V and Victor Rothschild, as well as acclaimed studies of the Victorian Prime Minister Lord Salisbury and his family in The Later Cecils. He died in 2014, writing his journals to the end.

D. R. Thorpe was born in 1943 and educated at Fettes and Selwyn College, Cambridge. He is a Fellow of the Royal Historical Society and a regular contributor to the Oxford Dictionary of National Biography. He has published five acclaimed biographical works, the most recent of which, Supermac: The Life of Harold Macmillan won the Biennial Marsh Biography Award 2009-10.