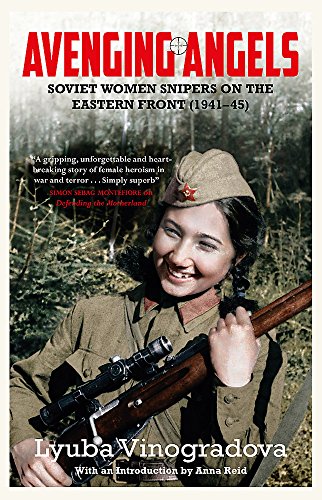 The girls came from every corner of the U.S.S.R. They were factory workers, domestic servants, teachers and clerks, and few were older than twenty. Though many had led hard lives before the war, nothing could have prepared them for the brutal facts of their new existence: with their country on its knees, and millions of its men already dead, grievously wounded or in captivity, from 1942 onwards thousands of Soviet women were trained as snipers.

Thrown into the midst of some of the fiercest fighting of the Second World War they would soon learn what it was like to spend hour upon hour hunting German soldiers in the bleak expanses of no-man's-land; they would become familiar with the awful power that comes with taking another person's life; and in turn they would discover how it feels to see your closest friends torn away from you by an enemy shell or bullet.

In a narrative that travels from the sinister catacombs beneath the Kerch Peninsula to Byelorussia's primeval forests and, finally, to the smoking ruins of the Third Reich, Lyuba Vinogradova recounts the untold stories of these brave young women. Drawing on diaries, letters and interviews with survivors, as well as previously unpublished material from the military archives, she offers a moving and unforgettable record of their experiences: the rigorous training, the squalid living quarters, the blood and chaos of the Eastern Front, and those moments of laughter and happiness that occasionally allowed the girls to forget, for a second or two, their horrifying circumstances.

Avenging Angels is a masterful account of an all-too-often overlooked chapter of history, and an unparalleled account of these women's lives.

Translated from the Russian by Arch Tait

Well written, engaging and enlightening. -- Roger Moorhouse * The Times. *
Revelatory and gripping. Deftly weaving together the personal - untold - stories of those Russian women who fought as frontline snipers, the author provides a chilling but moving insight into the realities of a brutal struggle. -- Jonathan Dimbleby
A riveting study of individuals who saw and did things no woman or man should ever have to . . . Vinogradova is clearly enthralled, if not enraptured, by her subjects. -- Jonathan O'Brien * Sunday Business Post. *
Lyuba Vinogradova has written an impressive book, and drawing on letters, diaries and interviews with doughty survivors, she has woven a powerful and moving account of a people at war and of women rising up to take arms, free their country - and, paradoxically, assert their common humanity -- Eamon Delaney * Irish Independent *
A detailed and vividly immediate account. -- Lucy Hughes-Hallett * New Statesman *
Describes in detail how hardened Soviet female soldiers became ruthless crack shots behind enemy lines on the bitter Eastern Front. * Irish Independent Books of the Year *
Dr Lyuba Vinogradova was born in Moscow in 1973. After graduating from the Moscow Agricultural Academy with a PhD in microbiology, she took a second degree in foreign languages. In 1995 she was introduced to Antony Beevor and helped him research Stalingrad. Since then she has worked on many other research projects, and is the co-author (together with Beevor) of A Writer at War: Vasily Grossman with the Red Army. Her book about Russian women fighter pilots, Defending the Motherland, a companion volume to this, was published in 2015, with an introduction by Antony Beevor
GOR008367509
9780857051967
0857051962
Avenging Angels: Soviet women snipers on the Eastern front (1941-45) Lyuba Vinogradova
Lyuba Vinogradova
Gebraucht - Sehr Gut
Gebundene Ausgabe
Quercus Publishing
2017-04-06
304
N/A
Die Abbildung des Buches dient nur Illustrationszwecken, die tatsächliche Bindung, das Cover und die Auflage können sich davon unterscheiden.
Dies ist ein gebrauchtes Buch. Es wurde schon einmal gelesen und weist von der früheren Nutzung Gebrauchsspuren auf. Wir gehen davon aus, dass es im Großen und Ganzen in einem sehr guten Zustand ist. Sollten Sie jedoch nicht vollständig zufrieden sein, setzen Sie sich bitte mit uns in Verbindung.