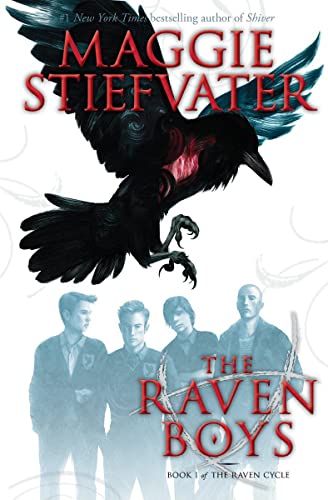 Every year, Blue Sargent stands next to her clairvoyant mother as the soon-to-be dead walk past. Blue never sees them--until this year, when a boy emerges from the dark and speaks to her.

His name is Gansey, a rich student at Aglionby, the local private school. Blue has a policy of staying away from Aglionby boys. Known as Raven Boys, they can only mean trouble.

But Blue is drawn to Gansey, in a way she can't entirely explain. He is on a quest that has encompassed three other Raven Boys: Adam, the scholarship student who resents the privilege around him; Ronan, the fierce soul whose emotions range from anger to despair; and Noah, the taciturn watcher who notices many things but says very little.

For as long as she can remember, Blue has been warned that she will cause her true love to die. She doesn't believe in true love, and never thought this would be a problem. But as her life becomes caught up in the strange and sinister world of the Raven Boys, she's not so sure anymore.

e "Stiefvater's novel, inspired by Manx, Irish, and Scottish legends of beautiful but deadly fairy horses that emerge from the sea each autumn, begins rivetingly and gets better and better . . . all the way, in fact, to best."
-Horn Book Review, Starred Review

e "Masterful...like nothing else out there now."
-Kirkus Reviews, Starred Review

e "A book with cross-appeal to lovers of fantasy, horse stories, romance, and action-adventure, this seems to have a shot at being a YA blockbuster."
-Booklist, Starred Review

e "Up-On the sea-battered and wind-swept isle of Thisby, fall brings the famed and feared capaill uisce, or water horses, and with them, death . . . The author takes great liberties with the Celtic myth, but the result is marvelous."
-School Library Journal, Starred Review

"Tactile world-building, an island full of compelling characters, and the budding romance between Sean and Puck all make for an unforgettable book that's quite unlike anything else out there."
-NPR Books

"With this beautifully executed drama, Stiefvater has established herself as one of the finest YA novelists writing today."
-Entertainment Weekly