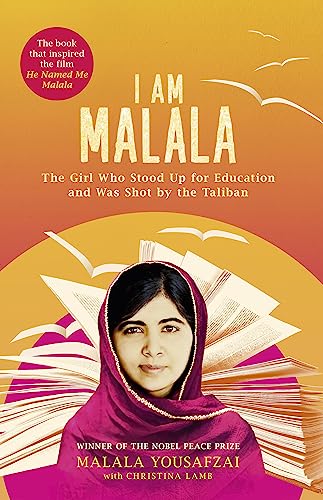 I Am Malala Malala Yousafzai

The bestselling memoir of NOBEL PRIZE winner, Malala Yousafzai, the school girl who stood up to the Taliban. I AM MALALA inspired the BAFTA-nominated film HE NAMED ME MALALA, directed by Oscar-winner Davis Guggenheim.

I Am Malala: The Girl Who Stood Up for Education and was Shot by the Taliban Malala Yousafzai

Malala Yousafzai came to public attention by writing for BBC Urdu about life under the Taliban. In October 2012, she was targeted by the Taliban and shot in the head as she was returning from school on a bus. She miraculously survived and continues her campaign for education. In recognition of her courage and advocacy, Malala was honoured with the NATIONAL PEACE PRIZE in Pakistan in 2011. She is the youngest ever person nominated for a NOBEL PEACE PRIZE. She was shortlisted for TIME magazine Person of the Year and has received numerous other awards. Malala continues to champion universal access to education through the Malala Fund.

Christina Lamb is one of the world's leading foreign correspondents. She is the author of five books and has won a string of awards, including Britain's FOREIGN CORRESPONDENT OF THE YEAR five times as well as the PRIX BAYEUX. She currently works for the SUNDAY TIMES and lives between London and Portugal with her husband and son.