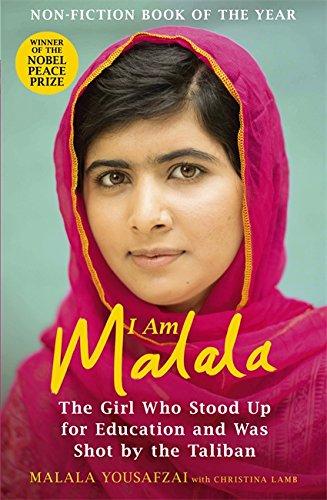 I Am Malala Malala Yousafzai

The bestselling memoir of youngest ever NOBEL PRIZE winner, Malala Yousafzai, the schoolgirl who stood up to the Taliban.

I Am Malala: The Girl Who Stood Up for Education and was Shot by the Taliban Malala Yousafzai

Moving and illuminating -- Catherine Bennett * OBSERVER *
For sheer inspiration read I Am Malala -- Kirsty Brimelow * THE TIMES *
Not only powerful, but also very instructive about the recent history of Pakistan and the pressures of everyday life there. One finishes the book full of admiration both for Malala, and for her father, who has clearly inspired her * THE SUNDAY TIMES *
Malala Yousafzai's story begins with her parents being commiserated with after producing a baby girl. In their part of northern Pakistan, she says, rifle shots ring out in celebration of a baby boy's arrival. But there is no such fanfare for females: their destiny is to cook and clean, to be neither seen nor heard... So how did Malala, who barely warranted a mention in her family's genealogy, become destined for the history books as a powerful symbol for girls' universal right to an education? Her memoir I Am Malala tells us how -- Baroness Warsi * DAILY TELEGRAPH *
One of the more moving details in I Am Malala is that her mother was due to start learning to read and write on the day Malala was shot - 9 October 2012 -- Kamila Shamsie * The GUARDIAN *
Her story is astonishing -- Owen Bennett-Jones * SPECTATOR *
This memoir brings out her best qualities. You can only admire her courage and determination. Her thirst for education and reform appear genuine. She also has an air of innocence, and there is an indestructible confidence. She speaks with such poise that you forget Malala is 16 -- Ziauddin Sardar * THE TIMES *
Inspirational and powerful * GRAZIA *
The medical team that saved Malala; her own stoicism and resilience; the support of her family, now, again in exile, this time in Birmingham; Malala's level-headed resolve to continue to champion education and children's rights - these are all powerful reminders of the best in human nature. Much of the money Malala has been awarded has gone to the Malala fund (www.malalafund.org). "Please join my mission," she asks. It's vital that those of us who can, do -- Yvonne Roberts * OBSERVER *
A tale of immense courage and conviction which begins as [Malala] is shot for campaigning for the rights of girls to an education * THE INDEPENDENT *
Malala's voice has the purity, but also has the rigidity, of the principled. Whether she is being a competitive teenager and keeping track of who she bet in exams (and by how much) or writing a blog for the BBC that catapulted her on to the international stage - "We were learning how to struggle. And we were learning how powerful we are when we speak" - or talking about Pakistan's politicians ("useless"), Malala is passionate and intense. Her faith and her duty to the cause of girls' education is unquestionable, her adoration for her father - her role model and comrade in arms - is moving and her pain at the violence carried out in the name of Islam is palpable -- Fatima Bhutto * GUARDIAN *
The story of the girl shot by the Taliban for speaking up for women's education is one of idealism and stubborn courage, and a reminder that women's rights and many children's rights to education are continually threatened * METRO *
She has the heart and courage of a lioness and is a true inspiration -- Lorraine Kelly * THE SUN *
One finishes the book full of admiration both for Malala, and for her father, who has clearly inspired her -- Andrew Holgate * THE SUNDAY TIMES *
Malala Yousafzai is a cofounder and board member of Malala Fund. Malala began her campaign for education at age eleven, when she anonymously blogged for BBC Urdu about life under the Taliban in Pakistan's Swat Valley. Inspired by her father's activism, Malala soon began advocating publicly for girls' education, attracting international media attention and awards. At age fifteen, she was attacked by the Taliban for speaking out. Malala recovered in the United Kingdom and continued her fight for girls. In 2013, she founded Malala Fund with her father, Ziauddin. A year later, Malala received the Nobel Peace Prize in recognition of her efforts to see every girl complete twelve years of free, safe and quality education. She is currently a student at Oxford University, pursuing a degree in philosophy, politics and economics.
GOR008031737
9781780226583
1780226586
I Am Malala: The Girl Who Stood Up for Education and was Shot by the Taliban Malala Yousafzai
Malala Yousafzai
Gebraucht - Wie Neu
Broschiert
Orion Publishing Co
2014-10-09
320
N/A
Die Abbildung des Buches dient nur Illustrationszwecken, die tatsächliche Bindung, das Cover und die Auflage können sich davon unterscheiden.
Das Buch wurde gelesen, ist aber in gutem Zustand. Alle Seiten sind intakt, der Einband ist unversehrt. Leichte Gebrauchsspuren am Buchrücken. Das Buch wurde gelesen, sieht jedoch noch wie neu aus. Der Bucheinband weist keine sichtbaren Gebrauchsspuren auf. Gegebenenfalls ist auch ein Schutzumschlag verfügbar. Keine fehlenden oder beschädigten Seiten, keine Risse, eventuell minimale Knicke, keine unterstrichenen oder markierten Textstellen, keine beschrifteten Ränder.