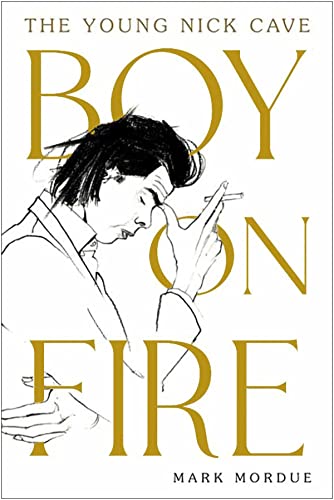 A brilliant and soulful biography of one of today's most acclaimed singer-songwriters, Nick Cave.

An intensely beautiful, profound and poetic biography of the formative years of the dark prince of rock 'n' roll, Boy on Fire is Nick Cave's creation story, a portrait of the artist first as a boy, then as a young man. A deeply insightful work which charts his family, friends, influences, milieu and, most of all, his music, it reveals how Nick Cave shaped himself into the extraordinary artist he would become.

A powerful account of a singular, uncompromising artist, Boy on Fire is also a vivid and evocative rendering of a time and place, from the fast-running dark rivers and ghost gums of country-town Australia to the torn wallpaper, sticky carpet and manic energy of the nascent punk scene which hit staid 1970s Melbourne like an atom bomb.

Boy on Fire is a stunning biographical achievement.

A fascinating read, both as an occult history of Australian punk - it's hard not to like the sound of the Filth, a Sydney quartet whose audition for a major label involved their lead singer repeatedly head-butting a door - and a kind of rake's progress. -- Alexis Petridis * Guardian *
Engrossing...forensically researched...a writer with his own stylistic flourishes who intimately understands the milieu he is writing about. -- Kitty Empire * Observer *
[T]he kind of rock biography that makes all music writers feel inadequate by comparison. Ostensibly the story of Nick Cave's formative years, it is so beautifully constructed that one is not just delivered besides the young Cave, but also next to the modern version. -- Ted Kessler * The New Cue *
There is plenty of humour in Boy on Fire...and beautiful moments, as well as delinquency and sadness...Hopefully Mordue will write a follow-up to this highly engaging biography very soon. * Buzz Magazine *
[H]is access to Cave and associates also creates an unusually intimate account. * Mojo *
Mordue's book offers total immersion in the artist's early years...paints a vivid portrait of an artist in the process of becoming * Uncut *
Beautifully written...Mark Mordue expertly guides us on a journey as he narrates memories of Nick Cave from a middle-class background, trying to find his way in life in those wilder, often destructive early years. * Louder Than War *
[an] expertly detailed account of the prodigious entertainer's early years. All the relevant voices have their say, creating a wonderfully alive picture of this tumultuous time...Anyone looking to join the dots of Cave's music and career will appreciate this work, as will those interested in how life shapes art. * Bookseller and Publisher *
Nuanced and unflinching, this conversational collection of stories and reminiscences paints a compelling picture of Cave, drawing on the friendships and creative influences that helped shape one of Australia's most enigmatic sons. * The Age *
Mordue's exploration of Cave's protean and dynamic artistic universe, and the boy at its heart - malanderer, badlander and fabulator - is rich, sensitive, rollicking and, yes, tender. -- Felicity Plunkett * The Australian *
A beautiful book, evocative and sensual, yet with an even-handed and at times critical treatment of its subject...Mordue's book reminds us that there is a human being behind the Black Crow King, the flaming scarecrow, the rampant misogynist, the empty undertaker's suit, the private schoolboy, or whatever else we might want to project onto Nick Cave. -- John Encarnacao * Sydney Review of Books *
[An] excellent new biography -- Tom Dunne * Irish Examiner *
An indispensable read for dedicated Cave heads * Irish Times *
A powerful and unusually focused biography -- David Fricke, The Writer's Block, SiriusXM
Mark Mordue is an Australian writer, journalist and editor. He is a co-winner of the 2014 Peter Blazey Fellowship, which recognises an outstanding manuscript in the fields of biography, autobiography or life writing, and also the author of Dastgah: Diary of a Headtrip. He lives in Sydney.
Prologue: The Journalist and the Singer Part I: The Rider 1: Such Is Life 2: King and Country Part II: The Good Son 3: Man in the Moon 4: Down by the River Part III: Sonny's Burning 5: The Word 6: Double Trouble 7: Zoo Music Girl 8: Boy Hero Part IV: God's Hotel 9: Shivers 10: Flight from Death 11: Crime and Punishment Epilogue: The Singer and the Song
NPB9781838953690
9781838953690
1838953698
Boy on Fire: The Young Nick Cave Mark Mordue
Mark Mordue
Neu
Gebundene Ausgabe
Atlantic Books
20210304
432
N/A
Die Abbildung des Buches dient nur Illustrationszwecken, die tatsächliche Bindung, das Cover und die Auflage können sich davon unterscheiden.
Dies ist ein neues Buch - lesen Sie als Erster dieser Kopie. Mit unberührten Seiten und einer perfekten Bindung kann Ihre brandneue Kopie zum ersten Mal geöffnet werden.