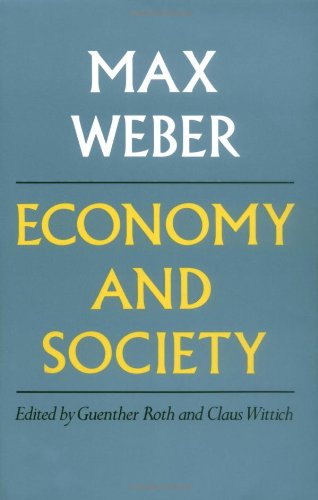 Auf Lager
€26.99
A study guide and compendium of social structures and normative orders in world-historical depth, containing chapters on social action, religion, law, bureaucracy, charisma, the city, and the political community with its dimensions of class, status and power.
Sehr Gut
Nur noch 1

Max Weber's "Economy and Society" is the greatest sociological treatise written in this century. Published posthumously in Germany in the early 1920's, it has become a constitutive part of the modern sociological imagination. "Economy and Society" was the first strictly empirical comparison of social structures and normative orders in world-historical depth, containing the famous chapters on social action, religion, law, bureaucracy, charisma, the city, and the political community with its dimensions of class, status and power. "Economy and Society" is Weber's only major treatise for an educated general public. It was meant to be a broad introduction, but in its own way it is the most demanding textbook yet written by a sociologist. The precision of its definitions, the complexity of its typologies and the wealth of its historical content make the work a continuous challenge at several levels of comprehension: for the advanced undergraduate who gropes for his sense of society, for the graduate student who must develop his own analytical skills, and for the scholar who must match wits with Weber. When the long-awaited first complete English edition of "Economy and Society" was published in 1968, Arthur Stinchcombe wrote in the "American Journal of Sociology": 'My answer to the question of whether people should still start their sociological intellectual biographies with "Economy and Society" is yes'. Reinhard Bendix noted in the "American Sociological Review" that the 'publication of a compete English edition of Weber's most systematic work [represents] the culmination of a cultural transmission to the American setting...It will be a study-guide and compendium for years to come for all those interested in historical sociology and comparative study'. In a lengthy introduction, Guenther Roth traces the intellectual prehistory of "Economy and Society", the gradual emergence of its dominant themes and the nature of its internal logic. Mr. Roth is a Professor of Sociology at Columbia University. Mr. Wittich heads an economic research group at the United Nations.