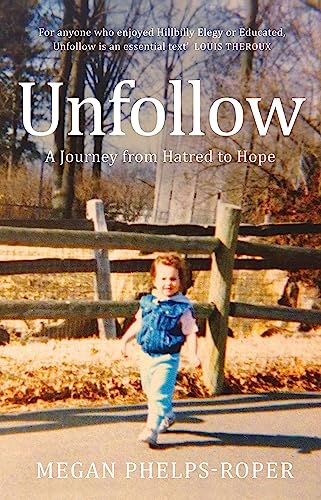 The metamorphic journey of Megan Phelps-Roper: a young woman raised in a religious hate group, who has become an advocate for equality, diversity and tolerance.

LOUIS THEROUX: 'For anyone who enjoyed Hillbilly Elegy or Educated, Unfollow is an essential text'
PANDORA SYKES: 'Such a moving, redemptive, clear-eyed account of religious indoctrination'
NICK HORNBY: 'A beautiful, gripping book about a singular soul, and an unexpected redemption'
DOLLY ALDERTON: 'A modern-day parable for how we should speak and listen to each other'
JON RONSON: 'Her journey - from Westboro to becoming one of the most empathetic, thoughtful, humanistic writers around - is exceptional and inspiring'

It was an upbringing in many ways normal. A loving home, shared with squabbling siblings, overseen by devoted parents. Yet in other ways it was the precise opposite: a revolving door of TV camera crews and documentary makers, a world of extreme discipline, of siblings vanishing in the night.

Megan Phelps-Roper was raised in the Westboro Baptist Church - the fire-and-brimstone religious sect at once aggressively homophobic and anti-Semitic, rejoiceful for AIDS and natural disasters, and notorious for its picketing the funerals of American soldiers. From her first public protest, aged five, to her instrumental role in spreading the church's invective via social media, her formative years brought their difficulties. But being reviled was not one of them. She was preaching God's truth. She was, in her words, 'all in'.

In November 2012, at the age of twenty-six, she left the church, her family, and her life behind.

Unfollow is a story about the rarest thing of all: a person changing their mind. It is a fascinating insight into a closed world of extreme belief, a biography of a complex family, and a hope-inspiring memoir of a young woman finding the courage to find compassion for others, as well as herself.

'A gripping story, beautifully told . . . It takes real talent to produce a book like this. Its message could not be more urgent' Sunday Times

'An exceptional book' The Times

'Unfolds like a suspense novel . . . A brave, unsettling, and fascinating memoir about the damage done by religious fundamentalism' NPR

Megan Phelps-Roper is a beautiful writer, and her journey - from Westboro to becoming one of the most empathetic, thoughtful, humanistic writers around - is exceptional and inspiring. I met Megan shortly after she left her church. She said, 'I want to do good, but I don't know how.' With Unfollow she's figured out how.Megan Phelps-Roper has guts - maybe more guts than can comfortably be contained within one adult human. First, as a member of the scary Westboro Baptist Church, she had the guts to get into the faces of people she disapproved of, gays and Jews and less fiery Christians, and tell them why God hated them. Then - and this is where you and I come in - she had the guts to listen and to think, and to decide that everything she had built her life upon was wrong. This is a beautiful, gripping book about a singular soul, and an unexpected redemption.Unfollow is a book that speaks eloquently to our divided times: the tale of a young girl born into a family whose name is a byword for bigotry and how she grew into a compassionate young woman, leaving her family behind and forging an entirely new understanding of the world and her place in it. Full of insight, thoughtfulness and vivid detail, it is also the debut of a gifted new writer. For anyone who enjoyed Hillbilly Elegy or Educated, Unfollow is an essential text, a testament to the fact that there is no-one immune to childhood indoctrination, but also to the ever-present possibility of profound change.Megan Phelps-Roper is one of the most inspiring women I have ever met. If you want to see how a girl raised on religious fanaticism and sectarian hatred can be cured by the power of honest reasoning, read this book.Megan Phelps-Roper finds a way to tell the story of the girl she was raised to be from the perspective of the woman she became, without rewriting history or losing touch with the earnestness that made everything in her world seem ok, if not downright righteous. Despite a fundamental transformation of epic proportions, Megan's core, her soul, remains the same throughout: kind, passionate, and open. Her process is wildly brave and incredibly thoughtful and this book gives us the incomparable insight into a world we all, and yet, none of us, know. This book will leave you holding your heart.Rarely do you come across someone with the courage and clarity of Megan Phelps-Roper. From her story, we can learn things sorely needed in our age: empathy, openness, and how we can best build bridges across divided lines.
Megan Phelps-Roper was raised in the Westboro Baptist Church: the Topeka, Kansas religious group known internationally for its daily public protests against members of the LGBT community, Jews, the military, other Christians, and countless others. As a child, teenager, and early twenty-something, she participated in the picketing almost daily and spearheaded the use of social media in the church. Dialogue with 'enemies' online proved instrumental in her deradicalization, and she left the church and her entire way of life in November 2012. Since then she has become an advocate for people and ideas she was taught to despise - especially the value of empathy in dialogue with people across ideological lines. She lives in South Dakota.
GOR011062911
9781787478015
1787478017
Unfollow Megan Phelps-Roper
Megan Phelps-Roper
Gebraucht - Sehr Gut
Broschiert
Quercus Publishing
2020-10-08
304
N/A
Die Abbildung des Buches dient nur Illustrationszwecken, die tatsächliche Bindung, das Cover und die Auflage können sich davon unterscheiden.
Dies ist ein gebrauchtes Buch. Es wurde schon einmal gelesen und weist von der früheren Nutzung Gebrauchsspuren auf. Wir gehen davon aus, dass es im Großen und Ganzen in einem sehr guten Zustand ist. Sollten Sie jedoch nicht vollständig zufrieden sein, setzen Sie sich bitte mit uns in Verbindung.