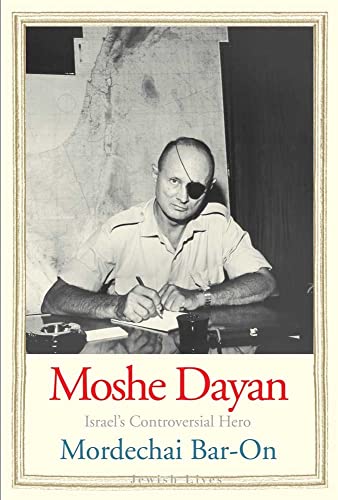 From the prizewinning Jewish Lives series, a vivid portrait of one of the most powerful leaders in Israel's first decades of statehood

Instantly recognizable with his iconic eye patch, Moshe Dayan (1915-1981) was one of Israel's most charismatic-and controversial-personalities. As a youth he earned the reputation of a fearless warrior, and in later years as a leading military tactician, admired by peers and enemies alike. As chief of staff during the 1956 Sinai Campaign and as minister of defense during the 1967 Six Day War, Dayan led the Israel Defense Forces to stunning military victories. But in the aftermath of the bungled 1973 Yom Kippur War, he shared the blame for operational mistakes and retired from the government. He later proved himself a principled and talented diplomat, playing an integral role in peace negotiations with Egypt.

In this memorable biography, Mordechai Bar-On, Dayan's IDF bureau chief, offers an intimate view of Dayan's private life, public career, and political controversies, set against an original analysis of Israel's political environment from pre-Mandate Palestine through the early 1980s. Drawing on a wealth of Israeli archives, accounts by Dayan and members of his circle, and firsthand experiences, Bar-On reveals Dayan as a man unwavering in his devotion to Zionism and the Land of Israel. Moshe Dayan makes a unique contribution to the history of Israel and the complexities of the Arab-Israeli conflict.

Jewish Lives is a prizewinning series of interpretative biography designed to explore the many facets of Jewish identity. Individual volumes illuminate the imprint of Jewish figures upon literature, religion, philosophy, politics, cultural and economic life, and the arts and sciences. Subjects are paired with authors to elicit lively, deeply informed books that explore the range and depth of the Jewish experience from antiquity to the present.

In 2014, the Jewish Book Council named Jewish Lives the winner of its Jewish Book of the Year Award, the first series ever to receive this award.

This well-written and absorbing book offers an authoritative account of the life of Moshe Dayan and places him in the context of larger events. Doing justice to the complex and intriguing persona of Dayan, Bar-On writes for a wide audience, both general readers and students of Israel and the Middle East. I read it with great interest and profit.-Itamar Rabinovich, former Israeli ambassador to the United States and author of Waging Peace: Israel and the Arabs, 1948-2003