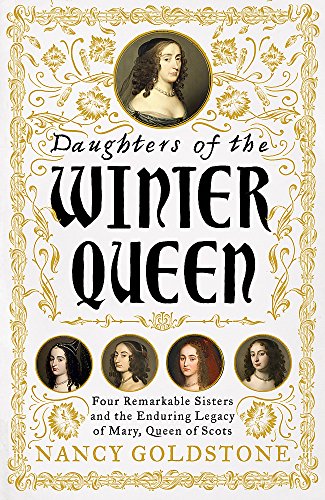 The extraordinary story of a seventeenth-century queen who lost her throne, and of her four defiant daughters.

Daughters of the Winter Queen: Four Remarkable Sisters, the Crown of Bohemia and the Enduring Legacy of Mary, Queen of Scots Nancy Goldstone

In a sweeping narrative encompassing political intrigue, illicit love affairs and even a murder mystery, Nancy Goldstone tells the riveting story of a queen who lost her throne, and of her four defiant daughters.

Elizabeth Stuart's marriage to a German count far below her rank was arranged with the understanding that her father, James I of England, would help his new son-in-law achieve the crown of Bohemia. The terrible betrayal of this promise would ruin 'the Winter Queen', as Elizabeth would forever be known, imperil the lives of those she loved and launch a war that would last thirty years.

Forced into exile, the Winter Queen found refuge for her growing family in Holland, where the glorious art and culture of the Dutch Golden Age formed the backdrop to her daughters' education. The eldest, Princess Elizabeth, counted the philosopher Rene Descartes as her closest friend. Louisa, whose lively manner would provoke heartache and scandal, was a gifted artist. Henrietta Maria, the beauty of the family, would achieve the dynastic ambition of marrying into royalty, although at great cost. But it was the youngest, Sophia, a heroine in the tradition of Jane Austen, with a ready wit and strength of character, who would fulfil the promise of her great-grandmother Mary, Queen of Scots, a legacy which endures to this day.

What a compelling read! Nancy Goldstone has brought to life the four female Stuarts in all their tragic glory -- Amanda Foreman, author of Georgiana, Duchess of Devonshire
Goldstone is a master juggler. She tells a good story, always with a delightfully light touch. In the process, extraordinary women are given the attention they deserve. Goldstone brings them to prominence in a way that preserves their femininity while highlighting their strength. This is a feminist history without ever trying to be one -- Gerard DeGroot * The Times *
The political intrigues of 17th-century Europe are brought vividly to life in this biography of Elizabeth of Bohemia and her daughters ... this is an enjoyable book, a good piece of popular history - that is, the kind of history that people read for pleasure -- Alan Massie * The Scotsman *
Extremely entertaining and immersive -- Minoo Dinshaw * The Oldie *
Daughters of the Winter Queen flows beautifully from one chapter to the next, making it difficult to put down. Goldstone's immersive style of writing is also a winner ... the book is remarkably balanced considering that Goldstone had five intelligent women to discuss ... Daughters of the Winter Queen is a wonderfully compelling read that will interest anyone who is into royal history. Engaging, accessible, fascinating * All About History *
'An engaging narrative... vivid and convincing... Goldstone is used to managing the reins of a multi-faceted royal narrative - and, once again, she does it with consummate skill -- Sarah Gristwood * BBC HISTORY MAGAZINE *
Goldstone weaves her way through a turbulent century of civil war, regicide, and revolution to show us, in the search for a Protestant successor to the eventually childless Queen Anne, how Scottish Mary's feisty great-granddaughter Sophia almost became the Queen of England ... Goldstone's forthright and often witty asides keep this complicated story bowling along at a terrific pace ... Lively and well-researched, Daughters of the Winter Queen offers a timely introduction to a turbulent period in Britain's past relations with Europe * New York Times Book Review *
Nancy Goldstone presents a fascinating look at the family of Elizabeth Stuart. The tentacles of this extensive family reached across Europe, and the children of the Winter Queen were involved in many of the major events of the seventeenth century. Goldstone skillfully brings to the forefront the central role marriage politics played among noble and royal dynasties, and the granddaughter and great-granddaughters of Mary Queen of Scots emerge as ambitious and skilled negotiators -- Johanna Luthman, author of Love, Madness, and Scandal: The Life of Frances Coke Villiers, Viscountess Purbeck
This rich and complex story of a seventeenth-century queen who lost her throne, and her four defiant daughters, is compulsively readable. Combining rigorous research with a vivid writing style, Nancy Goldstone illuminates the women who have often been left in the shadows of history, and reminds us that fascination with royalty is nothing new -- Charlotte Gray, author of Gold Diggers: Striking It Rich in the Klondike
The story of how one remarkable woman's drive to survive secured the succession of the British crown to this day ... A great book for history fans seeking illumination on the connections of European royalty * Kirkus Reviews *
Ms Goldstone ... is a thrilling narrator of this complicated history. Yet the achievement of a work like this is not merely its command of a vast and dense web of the past, but also its incredible literary merit. Daughters of the Winter Queen is nothing short of page-turning, an exceptional work of scholarship that reads like a favorite novel filled with political intrigue, romantic scandal, and more than one dark-of-night escape. If you are ... desperately awaiting season three of The Crown, you might at least avail yourself in the meantime of this fascinating account of where the queen's royal line began -- Neil J. Young * East Hampton Star *
A compulsively readable account of an otherwise unfamiliar royal family. Goldstone writes with knowledge, humour and ease - a masterly storyteller who steers clear of overly academic language. Ideal for amateur Tudor historians who wish to be introduced to a lesser-known yet equally fascinating royal family * Library Journal, starred review *
Goldstone relates the eminently readable tale of Elizabeth Stuart, dubbed the Winter Queen, and her four lovely, talented daughters ... The story of these five women, each remarkable for individual reasons and in her own right, both illuminates and is offset by Goldstone's vividly rendered European backdrop * Booklist *
This lively, well-researched group biography focuses as much on the mother as on her more famous daughters ... [Goldstone] clearly presents a captivating story with empathy and humour in a relaxed, entertaining, modern voice * Publisher's Weekly *

Nancy Goldstone is the author of Four Queens: The Provencal Sisters Who Ruled Europe; Joanna: The Notorious Queen of Naples, Jerusalem and Sicily; The Maid and the Queen: The Secret History of Joan of Arc and Yolande of Aragon, The Rival Queens and Daughters of the Winter Queen. She lives in New York.