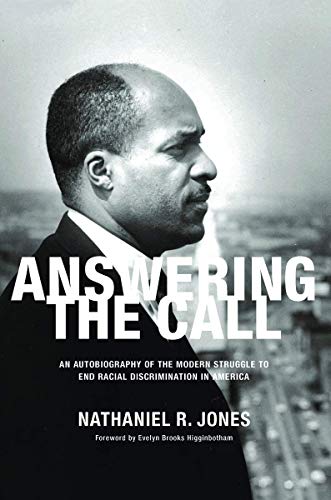 Answering The Call: A Memoir of the Modern Struggle to End Racial Discrimination in America Nathaniel R. Jones

Judge Nathaniel Jones's groundbreaking career was forged in the 1960s: as the first African American assistant U.S. attorney in Ohio; as assistant general counsel of the Kerner Commission; and, beginning in 1969, as general counsel of the NAACP. Answering the Call is an extraordinary account from an unsung hero of the battle for racial equality in America - a battle that, far from ending with the great victories of the civil rights era, continues into the present day. Judge Jones's story is an essential corrective to the idea of a post-racial America.
Praise for Answering the Call:
Jones, a trailblazing African American judge, delivers an urgently needed perspective on American history [Jones] convincingly argues throughout this passionate and informative account that the rule and force of law achieved through Brown v. Board of Education must be upheld, or we face a return to the racial injustices of the past.
Booklist Starred Review

This careful, considered debut highlights a life committed to justice and to the principle that the law is the 'inescapable route' to attaining equality.
Publishers Weekly

A forthright testimony by a witness to history.
Kirkus Reviews

Praise for Judge Nathaniel R. Jones:
Jones, a trailblazing African American judge, delivers an urgently needed perspective on American history [Jones] convincingly argues throughout this passionate and informative account that the rule and force of law achieved through Brown v. Board of Education must be upheld, or we face a return to the racial injustices of the past.
Booklist Starred Review

Nathaniel Jones was called to justice work the way others are called into ministry and we are all the better for it. An end to racial discrimination, abuse and bigotry is not inevitable. Racial justice is achieved when dedicated people do difficult and at times daunting work with little support or acknowledgment. No one understands that better than the legendary Judge Jones and this important book gives life to the idea that one person can make an enormous difference in the world.
Bryan Stevenson, professor of clinical law, New York University School of Law, and author of Just Money

Nathaniel R. Jones, one of the unsung heroes of the struggle for civil rights, has lived his life in the struggle for civil rights. Federal appellate judge, general counsel for the NAACP, leading lawyer in the private and public sectors, he has left an indelible mark on our nation. In a time of great cynicism and despair, his story, told with candor and grace, is a reminder of the call to service and higher ground. Answering the Call is that story, and we need to know it now.
Theodore M. Shaw, Julius L. Chambers Distinguished Professor of Law, University of North Carolina at Chapel Hill School of Law

Answering the Call is a richly drawn and revealing account of a brave lawyer and judge's fight for racial equality in America's schools and society. Judge Jones presents a story almost like a movie; you feel that you are there with him, facing the challenges and savoring the hard-won victories. It is an inspirational story that informs the present as we witness the power of personal relationships and the irreplaceable role of courage and stamina in achieving the racial equality that we and our nation still seek.
John E. Pepper, chief executive officer of the National Underground Railroad Freedom Center and former chairman of the board of the Walt Disney Company

This is the beautifully written story of an amazing life a man who has been a civil rights activist, a federal prosecutor, NAACP general counsel, a federal court of appeals judge, and a prominent attorney. But it also is the story of race in the United States over the 90 years of Nathaniel Jones's life, of the struggles, of how far our society has come, and how much is left to be done. It is a magnificent book that kept me enthralled and that is a reminder of how much one man can accomplish.
Erwin Chemerinsky, dean and distinguished professor of law, University of California, Irvine School of Law

[Jones] has blazed trails, opened doors, created opportunity, destroyed myths, and made America a better place for himself and for 'the least of these, our brothers and sisters.'
Vernon E. Jordan Jr.

Judge Jones's entire adult life is distinguished by one transcendent theme an overwhelming sense of duty to work for equality of opportunity through the rule of law Judge Jones's commitment to his ideals made him a national leader for civil liberties and human rights and for promoting the ideal of justice.
Gilbert S. Merritt, Chief Judge, U.S. Court of Appeals for the Sixth Circuit