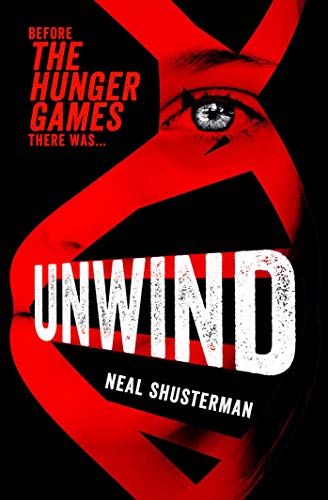 In a society where unwanted teens are salvaged for their body parts, three runaways fight the system that would 'unwind' them.

Connor, Risa and Lev are running for their lives.

Unwinding: the process by which a child is both terminated and yet kept alive. Unwinding is now a common, and accepted, practice in society.

Connor's parents want to be rid of him because he's a troublemaker.
Risa has no parents and is being unwound to cut orphanage costs.
Lev's unwinding has been planned since his birth as part of his family's strict religion.

Brought together by chance, and kept together by desperation, these unlikely companions make a harrowing cross-country journey, knowing their lives hang in the balance.

If they can survive until their 18th birthday, they can't be harmed - but when every piece of them, from their hands to their hearts, is wanted by a world gone mad, eighteen seems far, far away...

"Gripping, brilliantly imagined futuristic thriller... The issues raised could not be more provocative - the sanctity of life, the meaning of being human - while the delivery could hardly be more engrossing or better aimed to teens."Publishers Weekly, starred review
"A thought-provoking, well-paced read that will appeal widely"School Library Journal, starred review
"A breathless tale turning pages for teenage boys, as it challenges not just where life begins and ends, but what it means to be alive." Educ8 magazine
"a powerful, shocking, and intelligent novel... It's wonderful, wonderful stuff." The Bookbag
"This is the kind of rare book that makes the hairs on your neck rise up. It is written with a sense of drama that should get it instantly snapped up for film." The Times

Before there was The Hunger Games, there was Unwind.
"Well-written, this draws the readers into a world that is both familiar and strangely foreign, and generates feelings of horror, disturbance, disgust and fear. As with classics such as "1984" and "Fahrenheit 451", one can only hope that this vision of the future never becomes reality."--"Kirkus Reviews"
"The power of the novel lies in what it doesn't do: come down explicitly on one side or the other."--"The New York Times Book Review"
"Nail-biting, character-driven thriller."--"The Horn Book"
* "A thought-provoking, well-paced read that will appeal widely."--"School Library Journal", starred review
"Poignant, compelling, and ultimately terrifying, this book will enjoy popularity with a wide range of readers."--"VOYA", 4Q4P
"Following in the footsteps of Jonathan Swift, Shusterman uncorks a Modest Proposal of his own to solve a Pro-Life/Pro-Choice dilemma...ingeniously developed cast and premise."--"Booklist"
* "Gripping, brilliantly imagined futuristic thriller...The issues raised could not be more provocative--the sanctity of life, the meaning of being human--while the delivery could hardly be more engrossing or better aimed to teens."--"Publishers Weekly, "starred review
"The shocking premise is unveiled immediately, and a nail-biting pace is sustained throughout, with the teens flung headlong into a true life-or-death struggle...these haunting debates will likely linger in the reader's mind even after the riveting plot fades...an ideal blend of philosophy and action set in a compelling futuristic landscape."--"The Bulletin of the Center for Children's Books"
Neal Shusterman is a New York Times bestselling author and has written numerous award-winning books for children and young adults. His books include, The Skinjacker Trilogy (Everlost, Everwild and Everfound), Full Tilt, Unwind and Unwholly. He also writes screenplays and several of his books are now in development as films. Neal lives in Southern California when he's not travelling the globe, and can be found online at Storyman.com.
GOR004844793
9780857079978
0857079972
Unwind Neal Shusterman
Neal Shusterman
Gebraucht - Sehr Gut
Broschiert
Simon & Schuster Ltd
2012-09-27
368
N/A
Die Abbildung des Buches dient nur Illustrationszwecken, die tatsächliche Bindung, das Cover und die Auflage können sich davon unterscheiden.
Dies ist ein gebrauchtes Buch. Es wurde schon einmal gelesen und weist von der früheren Nutzung Gebrauchsspuren auf. Wir gehen davon aus, dass es im Großen und Ganzen in einem sehr guten Zustand ist. Sollten Sie jedoch nicht vollständig zufrieden sein, setzen Sie sich bitte mit uns in Verbindung.