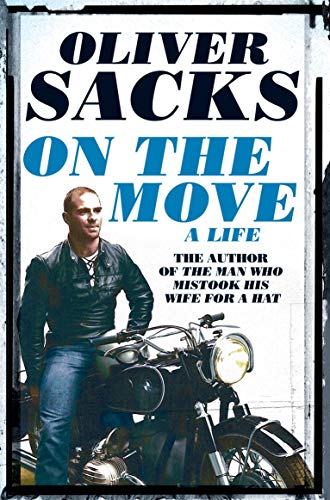 On the Move Oliver Sacks

An impassioned, tender and joyous memoir by the author of Musicophilia and The Man Who Mistook His Wife for a Hat.

On the Move: A Life Oliver Sacks

When Oliver Sacks was twelve years old, a perceptive schoolmaster wrote in his report: 'Sacks will go far, if he does not go too far'. It is now abundantly clear that Sacks has never stopped going. From its opening pages on his youthful obsession with motorcycles and speed, On the Move is infused with his restless energy. As he recounts his experiences as a young neurologist in the early 1960s, first in California and then in New York, where he discovered a long-forgotten illness in the back wards of a chronic hospital, as well as with a group of patients who would define his life, it becomes clear that Sacks's earnest desire for engagement has occasioned unexpected encounters and travels - sending him through bars and alleys, over oceans, and across continents.

With unbridled honesty and humour, Sacks shows us that the same energy that drives his physical passions - bodybuilding, weightlifting, and swimming - also drives his cerebral passions. He writes about his love affairs, both romantic and intellectual, his guilt over leaving his family to come to America, his bond with his schizophrenic brother, and the writers and scientists - Thom Gunn, A. R. Luria, W. H. Auden, Gerald M. Edelman, Francis Crick - who influenced him.

On the Move is the story of a brilliantly unconventional physician and writer - and of the man who has illuminated the many ways that the brain makes us human.

Deeply moving. . . a gift to his readers - of erudition, sympathy and an abiding understanding of the joys, trials and consolations of the human condition -- Michiko Kakutani * New York Times *
Sacks's empathy and intellectual curiosity, his delight in, as he calls it, "joining particulars with generalities" and, especially, "narratives with neuroscience" - have never been more evident than in his beautifully conceived new book. . .remarkably candid and deeply affecting * Boston Globe *
Honest, lucid, passionate, humorous, humane and human (also slightly Martian). . .[a] marvelous memoir, which is as unconventional and singular as the man himself -- Colin McGinn * Wall Street Journal *
Absorbing * Chicago Tribune *
A fascinating account - a sort of extended case study, really - of Sacks' remarkably active, iconoclastic adulthood. . . .On the Move is filled with both wonder and wonderments * LA Times *
Intensely, beautifully, incandescently alive * Newsday *
On the Move is as much a dense journal of Sacks's own astonishing, incident-rich life as a meaty handbook on how to live * Globe and Mail *
No matter what he writes about - whether struggling to understand what his patients are going through, or describing his love of swimming or photography - Sacks always seems open to learning more. He appears keenly interested in everything and everyone he encounters. He's a wonderful storyteller, a gift he says he inherited from his parents, both of whom were doctors. But as he proves again in his latest . . . book, it's his keen attentiveness as a listener and observer, and his insatiable curiosity, that makes his work so powerful * San Francisco Chronicle *
On the Move is entertaining and illuminating and sometimes shocking, and it's given a deep tinge of poignancy by Sacks' public announcement in February that he has terminal cancer. If On the Move is his effort, at age 81 and in the face of death, to record a life well lived, he has succeeded beautifully * Tampa Bay Times *
A compelling read. . .The memoir offers a glimpse into one of the greatest minds of our time, made all the more special by the knowledge that it's one of his last gifts to a devoted readership * Men's Journal *
[Sacks'] delving accounts of the invalids he treats have until now stood in stark contrast to his restraint about revealing himself deeply, even though autobiographical threads run through such books as A Leg to Stand On, Uncle Tungsten and Hallucinations. A doctor - concerned, engaging, humane, eccentric and unforthcoming - has occupied the foreground in his self-description. With On the Move, he has finally presented himself as he has presented others: as both fully vulnerable and an object of curiosity. -- Andrew Solomon * New York Times *
His truly has been a life lived to the full - and beyond . . . it is the adventure of ideas he has undertaken that has bestowed on his life its remarkable originality -- Will Self * Guardian *
[Sacks] could not have written a more breathtaking account of his too-full life. Who knew the most important medical writer of our time was also a complete and total badass? * Men's Fitness *
Sacks' zest for life has been extraordinary. . .Coursing through On the Move is his constant sense of joy in the natural world, in scientific epiphanies, and people in all their oddity. . . one of the most singular and inspiring men of our time -- Peter Forbes * Independent *
Sacks's accounts are startling in their frankness and express the release of a wise man who, never burdened by snobbery, has also shed that petty encumbrance, embarrassment. . . In February this year Sacks revealed that he has terminal cancer. He wrote in The New York Times that, though not without fear, his predominant feeling is gratitude. "I have loved and been loved; I have been given much and I have given something in return." This book is a remarkable record of those exchanges * London Evening Standard *
In this genial and often humorously narrated life, [Sacks] is very much alive and full of passionate energy, as well as of and wry self-awareness . . . He is an astute observer of the life around him. Judging from early motorcycle diaries and writings included here, he could have had an alternative career on the road with Hunter S Thompson * Guardian *
Like many of his readers, some months ago I responded with a sense of real personal sadness when reading Sacks' New York Times op-ed announcing his "bad luck" of now facing a terminal cancer. I felt as if a vital window on the world were being closed. On the Move is a glorious memoir that throws open that window and illuminates the world that we have seen through it. In this volume Sacks opens himself to recognition, much as he has opened the lives of others to being recognized in their fullness -- Michael Roth * The Atlantic *
This moving book confirms that it is Sacks's expansive passions for learning and for experience that have made his such a vigorous, fascinating and influential life . . .This book is a delight and a fine prompt to return to his earlier work * New Statesman *

A lively read and a fascinating insight into a man who changed the way the world sees things. . .revealing
and heartbreaking

* Courier Mail *
What emerges from On the Move is a celebration not just of a life, but of life itself, in all its glorious variousness and possibility. . . [a] joyous whirlwind of a book -- James Bradley * Capital City Daily *

An affecting read. . .Much will be lost when we can no longer eagerly await the next gift from this dearly loved,
stray Santa

* The Conversation *
A wonderful legacy to leave behind . . .It's an unmitigated pleasure to be in the company of this physician, teacher and storyteller * Big Issue Australia *

Oliver Sacks was born in 1933 in London and was educated at Queen's College, Oxford. He completed his medical training at San Francisco's Mount Zion Hospital and at UCLA before moving to New York, where he soon encountered the patients whom he would write about in his book Awakenings.

Dr Sacks spent almost fifty years working as a neurologist and wrote many books, including The Man Who Mistook His Wife for a Hat, Musicophilia, and Hallucinations, about the strange neurological predicaments and conditions of his patients. The New York Times referred to him as 'the poet laureate of medicine', and over the years he received many awards, including honours from the Guggenheim Foundation, the National Science Foundation, the American Academy of Arts and Letters, and the Royal College of Physicians. In 2008, he was appointed Commander of the British Empire. His memoir, On the Move, was published shortly before his death in August 2015.