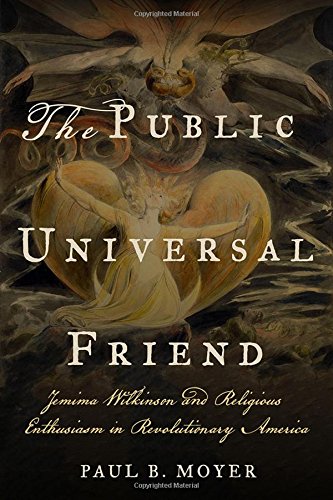 Amid political innovation and social transformation, Revolutionary America was also fertile ground for religious upheaval, as self-proclaimed visionaries and prophets established new religious sects throughout the emerging nation. Among the most influential and controversial of these figures was Jemima Wilkinson. Born in 1752 and raised in a Quaker household in Cumberland, Rhode Island, Wilkinson began her ministry dramatically in 1776 when, in the midst of an illness, she announced her own death and reincarnation as the Public Universal Friend, a heaven-sent prophet who was neither female nor male. In The Public Universal Friend, Paul B. Moyer tells the story of Wilkinson and her remarkable church, the Society of Universal Friends.

Wilkinson's message was a simple one: humankind stood on the brink of the Apocalypse, but salvation was available to all who accepted God's grace and the authority of his prophet: the Public Universal Friend. Wilkinson preached widely in southern New England and Pennsylvania, attracted hundreds of devoted followers, formed them into a religious sect, and, by the late 1780s, had led her converts to the backcountry of the newly formed United States, where they established a religious community near present-day Penn Yan, New York. Even this remote spot did not provide a safe haven for Wilkinson and her followers as they awaited the Millennium. Disputes from within and without dogged the sect, and many disciples drifted away or turned against the Friend. After Wilkinson's second and final death in 1819, the Society rapidly fell into decline and, by the mid-nineteenth century, ceased to exist. The prophet's ministry spanned the American Revolution and shaped the nation's religious landscape during the unquiet interlude between the first and second Great Awakenings.

This is very thorough book. It has drama in terms of stories of sexual intrigue, attempted murder and legal battles over land, and as much detail on Wilkinson and her ideas as the evidence probably supports... [F]or anyone interested in Quakerism and revival offshoots or in this period of American religious history, the book is essential.

Paul B. Moyer is Associate Professor of History at The College at Brockport (SUNY). He is the author of Wild Yankees: The Struggle for Independence along Pennsylvania's Revolutionary Frontier, also from Cornell.