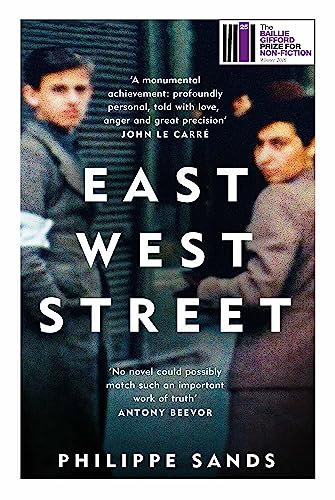 A uniquely personal exploration of the origins of international law, centring on the Nuremberg Trials, the city of Lviv and a secret family history

THE BRITISH BOOK AWARDS NON-FICTION BOOK OF THE YEAR 2017

When he receives an invitation to deliver a lecture in the Ukrainian city of Lviv, international lawyer Philippe Sands begins a journey on the trail of his family's secret history. In doing so, he uncovers an astonishing series of coincidences that lead him halfway across the world, to the origins of international law at the Nuremberg trial. Interweaving the stories of the two Nuremberg prosecutors (Hersch Lauterpacht and Rafael Lemkin) who invented the crimes or genocide and crimes against humanity, the Nazi governor responsible for the murder of thousands in and around Lviv (Hans Frank), and incredible acts of wartime bravery, EAST WEST STREET is an unforgettable blend of memoir and historical detective story, and a powerful meditation on the way memory, crime and guilt leave scars across generations.

'One of the most gripping and powerful books imaginable' SUNDAY TIMES

A monumental achievement: profoundly personal, told with love, anger and great precision -- John le Carre
Supremely gripping. Sands has produced something extraordinary. Written with novelistic skill, its prose effortlessly poised, its tone perfectly judged, his book teems with life, from the bustling streets of Habsburg Lviv to the high drama of the Nuremberg trials. One of the most gripping and powerful books imaginable -- Dominic Sandbrook * SUNDAY TIMES *
Important and engrossing. . . even when charting the complexities of law, Sands's writing has the intrigue, verve and material density of a first-rate thriller. . . He can magic whole histories of wartime heroism out of addresses eight decades old. Or, chasing the lead of a faded photograph, he can unearth possible alternate grandparents and illicit liaisons to be verified only by DNA tests. . . an exceptional memoir -- Lisa Appignanesi * OBSERVER *
Engrossing ... Sands has written a remarkable and enjoyable book, deftly weaving his own family history into a lively account of the travails of the early campaigners for international human rights law -- Caroline Moorhead * LITERARY REVIEW *
A magnificent book. A work of great brilliance. There is narrative sweep and intellectual grip. Everything that happens is inevitable and yet comes as a surprise. I was moved to anger and to pity. In places I gasped, in places I wept. I wanted to reach the end. I couldn't wait to reach the end. And then when I got there I didn't want to be at the end -- Daniel Finkelstein * THE TIMES *
A fascinating and revealing book, for the things it explains: the origins of laws that changed our world, no less. It's also a readable book, and thoughtful, and compassionate. Most fundamentally, though, it's a book that tells a few individual human stories that lie behind the world-changing ones. That storytelling isn't redemptive - what could be, in this context? - but it confronts all those silences and challenges them. That challenge makes it an important book too -- Daniel Hahn * THE SPECTATOR *
A vivid and readable contribution, part memoir, part documentary, to the history debate ... Much of the most compelling material in this book is personal ... Moving and powerful -- Mark Mazower * FINANCIAL TIMES *
Outstanding ... This is the best kind of intellectual history. Sands puts the ideas of Lemkin and Lauterpacht in context and shows how they still resonate today, influencing Tony Blair, David Cameron and Barack Obama. When we think of the atrocities committed by Slobodan Milosevic or Bashar al-Assad, it is the ideas of these two Jewish refugees we turn to. Sands shows us in a clear, astonishing story where they came from -- David Herman * NEW STATESMAN *
In a triumph of astonishing research, Sands has brilliantly woven together several family stories which lead to the great denouement at the Nuremberg tribunal. No novel could possibly match such an important work of truth -- Antony Beevor
A book like no other I have ever read - unputdownable and unforgettable -- Orlando Figes
A beautiful and necessary book -- A.L. Kennedy
Dazzling, shattering. EAST WEST STREET is one of the most extraordinary books that I have ever read -- Antonia Fraser
An exacting, heroic, essential education -- Peter Florence * DAILY TELEGRAPH *
A masterpiece -- Andrew Neather * EVENING STANDARD *
A narrative to my knowledge unprecedented. . . a machine of power and beauty that should not be ignored by anyone in the United States or elsewhere who would believe there are irreparable crimes whose adjudication should not stop at the border * NEW YORK TIMES *
Philippe Sands is Professor of Law at University College London and a practising barrister at Matrix Chambers. He frequently appears before international courts, and has been involved in many of the most important cases of recent years, including Pinochet, Yugoslavia, Rwanda, Iraq, Guantanamo, Chagos and the Rohingya in Myanmar. He is the author of LAWLESS WORLD, TORTURE TEAM and the Sunday Times bestselling EAST WEST STREET, which also won the Baillie Gifford Prize and was named Non-fiction Book of the Year at the British Book Awards.
GOR008628302
9781474601917
147460191X
East West Street: Non-fiction Book of the Year 2017 Philippe Sands, QC
Philippe Sands, QC
Gebraucht - Wie Neu
Broschiert
Orion Publishing Co
2017-03-31
496
Winner of Baillie Gifford Prize for Non-Fiction 2016 (UK)
Die Abbildung des Buches dient nur Illustrationszwecken, die tatsächliche Bindung, das Cover und die Auflage können sich davon unterscheiden.
Das Buch wurde gelesen, ist aber in gutem Zustand. Alle Seiten sind intakt, der Einband ist unversehrt. Leichte Gebrauchsspuren am Buchrücken. Das Buch wurde gelesen, sieht jedoch noch wie neu aus. Der Bucheinband weist keine sichtbaren Gebrauchsspuren auf. Gegebenenfalls ist auch ein Schutzumschlag verfügbar. Keine fehlenden oder beschädigten Seiten, keine Risse, eventuell minimale Knicke, keine unterstrichenen oder markierten Textstellen, keine beschrifteten Ränder.