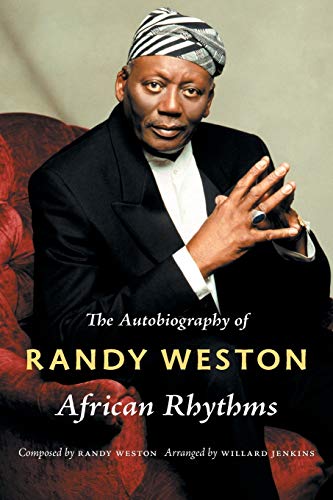 African Rhythms is the autobiography of the important jazz pianist, composer and band leader Randy Weston. He tells of his childhood in Brooklyn, his six decades long musical career, his time living in Morocco, and his lifelong quest to learn about the musical and cultural traditions of Africa.

African Rhythms is the autobiography of the important jazz pianist, composer and band leader Randy Weston. He tells of his childhood in Brooklyn, his six decades long musical career, his time living in Morocco, and his lifelong quest to learn about the musical and cultural traditions of Africa.
. . . Part memoir, part travelogue, part philosophical treatise. Mr. Weston is especially informative about how he briefly fled New York in his early 20s to escape the drug scene that was becoming endemic among young jazzmen, as well as about the making of classic albums like Uhuru Africa and Blue Moses. -- Will Friedwald * Wall Street Journal *
African Rhythms is perhaps the next truly wonderful jazz autobiography. It succeeds so fully not because of hyperbole or personality but because Weston-a pianist and composer criminally underappreciated even among serious jazz fans-has a unique musical story to tell. This story is highly recommended to jazz listeners, in large part, because it makes you want to dive back into one of the most gripping discographies in the music. . . . If you haven't heard Weston's music, really listened to it, then African Rhythms is the strongest possible incentive to tune in. Is there any higher praise for a book about music than that it got you to start listening? -- Will Layman * PopMatters *
No one has done more to explore and celebrate the African roots of jazz than pianist/composer Randy Weston. Weston demonstrates a pride in his ancestry and culture that is both the primary source of his artistic inspiration and the central theme that suffuses this fascinating autobiography. . . . Weston refers to himself as 'a storyteller through music' rather than a jazz musician. He's unsurpassed as a goodwill ambassador. -- Jay Trachtenberg * Austin Chronicle *
Now in his 80's, Weston, in this book, sounds eternally optimistic and full of wonder about his life. He comes off as joyous and spiritual as his music. Reading this is enough to make you want to dig out whatever Weston CDs you might have and listen to them again with a greater understanding of what went into the music. This book is worthy of his expansive talents.
-- Jerome Wilson * Cadence *
Randy Weston is a monumental figure in contemporary jazz, a man whose creativity remains undimmed at the age of 83. He is a living link with the golden era of the 1950s and 60s, a time during which trailblazing musicians and revolutionary thinkers wholly energised African-American arts and politics. As this absolutely fascinating biography reveals, Weston. . . has lived a very full life that has seen him not only excel as a musician but also make hugely important cultural and political statements that had the intent and effect of uplifting blacks in America during a time of second class citizenship. A recurrent theme in the text is thus Weston's focus on concrete initiatives to improve civil rights. . . . Essential reading for anybody interested in learning something of a great man as well as a great musician. -- Kevin La Gendre * Jazzwise *
Randy Weston knows more about jazz and more about Africa than most of us. Hence this book-more musical, philosophical and spiritual, with a more personal voice than most jazz autobiographies-is loaded with knowledge and insights about both topics. . . . From Stearns to the Gnawa musician healers of Morocco, from poet Langston Hughes to Dizzy Gillespie, Weston's fascinating journey is well worth the read. -- George Kanzler * All About Jazz *
Weston has dedicated his life to spreading African music throughout the world and forging a bond with his identity as an African American musician. African Rhythms ably recounts his sometimes arduous journey to becoming a true cross-cultural ambassador. -- Jon Ross * DownBeat *

Randy Weston is an internationally renowned pianist, composer, and bandleader living in Brooklyn, New York. He has made more than forty albums and performed throughout the world. Weston has been inducted into the ASCAP Jazz Wall of Fame, designated a Jazz Master by the National Endowment for the Arts, and named Jazz Composer of the Year three times by DownBeat magazine. He is the recipient of many other honors and awards, including France's Order of Arts and Letters, the Black Star Award from the Arts Critics and Reviewers Association of Ghana, and a five-night tribute at the Montreal Jazz Festival.

Willard Jenkins is an independent arts consultant, producer, educator, and print and broadcast journalist. His writing has been featured in JazzTimes, DownBeat, Jazz Report, Jazz Forum, All About Jazz, Jazzwise, and many other publications. He contributed two chapters to Ain't Nothing like the Real Thing: How the Apollo Theater Shaped American Entertainment.