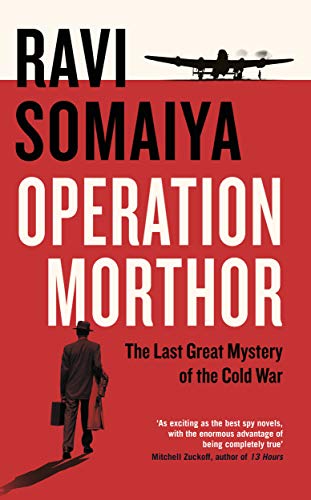 In 1961 the Congo was in crisis, fragmented and at war with itself. The streets of Leopoldville, the capital, were crawling with CIA operatives, MI6 agents and Soviet infiltrators. Belgian colonialists, Rhodesian white supremacists and corporate mercenaries massed in the south of the country. The chaos conspired to make it one of the most dangerous places on earth.

UN Secretary General Dag Hammarskjoeld, the man John F. Kennedy called 'the greatest statesman of our century' flew into the maelstrom. He was an idealist. The Congo's best hope for peace and independence. But en route to a diplomatic summit to reunite the country, Hammarskjoeld's plane mysteriously disappeared. Soon afterward he was discovered dead in the smoking wreckage, an Ace of Spades playing card placed on his body.

A riveting work of investigative journalism based on new evidence, recently revealed first-hand accounts, and groundbreaking interviews, Operation Morthor reveals the plot behind one of the longest-standing murder mysteries of the Cold War, with dark implications for governments and corporations alike.

'Operation Morthor is as exciting as the best spy novels, with the enormous advantage of being completely true. Ravi Somaiya masterfully teases out the tangled strands of a Cold War mystery in a place where nothing and no one are quite what they seem. The result is a gripping book by a gifted writer and a dogged investigator' -- Mitchell Zuckoff, author of 13 Hours
'Operation Morthor is one of the most gripping nonfiction books I've read in a very long time, a real-life thriller about the mysterious death of Dag Hammarskjold, the second Secretary General of the UN, in 1961. Somaiya is one of the country's best journalists, and he's used his prodigious reporting and researching skills to dig up some truly startling new information about the plane crash in the Congo that killed Hammarskjold and spawned an almost never-ending series of conspiracy theories. Somaiya does a masterful job sifting the evidence and building a case of murder. This is a fabulous page turner. I highly recommend it' -- Douglas Preston, author of The Monster of Florence
'Ravi Somaiya's brilliant unwrapping of the mystery surrounding Hammarskjold's death will convert the reader into an avid investigator the moment they pick up this book! A compelling read - filled with revelations and written in a style that's clean and fast-paced, Operation Morthor also raises key questions before governments who still act suspiciously: why? What are you hiding exactly?' -- Zeid Ra'ad Al Hussein, UN Human Rights Chief (2014-2018)
'What caused the 1961 plane crash that killed UN Secretary-General Hammarskjoeld, who was attempting at the time to end a war in the Congo? Though the official accounts identified either pilot error or accident as having been responsible, investigative journalist Somaiya lays out the evidence suggesting foul play in his impressive debut. An eye-opening account' -- Publisher's Weekly, Starred Review
Ravi Somaiya was most recently a correspondent for the New York Times. He has written for the Guardian, Rolling Stone and New York Magazine among others, and has presented and produced documentaries for Vice and HBO. He has covered Islamic extremist terrorism, disinformation, mass shootings, Anonymous and Wikileaks, among other long-running stories.
GOR011706358
9780241240649
0241240646
Operation Morthor: The Last Great Mystery of the Cold War Ravi Somaiya
Ravi Somaiya
Gebraucht - Gut
Gebundene Ausgabe
Penguin Books Ltd
2020-08-06
304
N/A
Die Abbildung des Buches dient nur Illustrationszwecken, die tatsächliche Bindung, das Cover und die Auflage können sich davon unterscheiden.
Dies ist ein gebrauchtes Buch. Es wurde schon einmal gelesen und weist von der früheren Nutzung Gebrauchsspuren auf. Wir gehen davon aus, dass es im Großen und Ganzen in einem sehr guten Zustand ist. Sollten Sie jedoch nicht vollständig zufrieden sein, setzen Sie sich bitte mit uns in Verbindung.