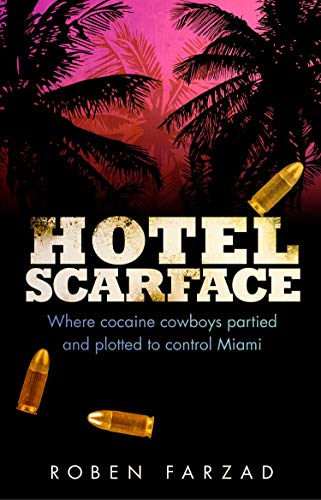 Amid the boatloads of powder and cash reigned the new kings of Miami: three waves of Cuban immigrants vying to dominate the trafficking of one of the most lucrative commodities ever known to man. But as the kilos-and bodies-began to pile up, the Mutiny became target number one for law enforcement.

Based on exclusive interviews and never-before-seen documents, Hotel Scarface is a portrait of a city high on excess and greed, an extraordinary work of investigative journalism offering an unprecedented view of the rise and fall of cocaine-and the Mutiny-in Miami.

A raucous history of the cocaine boom. * New York Times *
Part biography of a hotel, part elegant true-crime thriller, this is the ideal read for a South Beach winter sun lounger. * GQ *
Hotel Scarface is a journey into the surreal. The book sizzles with exquisitely detailed reporting and a fast-paced narrative that thrusts the reader right into the middle of Miami's cocaine-fueled madness. We're all lucky that Farzad's deft story-telling captures one of the most outrageous moments in American history in such a vivid way. * Ashlee Vance, New York Times bestselling author *
Stay up all night partying with the narcos and rock stars of Roben Farzad's Hotel Scarface - you can check out anytime, but you can never plead. * Vanity Fair *
Thought I was reading a Carl Hiaasen novel. Then I realized it was NON-fiction. Hotel Scarface is to Miami what 'Narcos' is to Colombia. * Michelle Caruso-Cabrera, CNBC's Chief International Correspondent *

Roben Farzad has reported everywhere from Mozambique and Botswana to the West Bank and the slums of Medellin, Colombia, to the Dominican Republic and the warn-torn Niger Delta.

He spent nine years as a senior writer at Bloomberg Businessweek, where he covered Wall Street, international finance, Latin America and Miami. He has written for the New York Times, Wall Street Journal, Boston Globe and Miami Herald, and is a regular on MSNBC, CNN, NPR, C-SPAN and the PBS NewsHour.

Farzad is a graduate of Princeton University's Woodrow Wilson School of International Affairs and the Harvard Business School, and has lectured students and at NYU, CUNY and Columbia. Born in Iran, he was raised in Miami and now lives in Virginia with his wife and their two kids, who also enjoy reruns of Miami Vice.