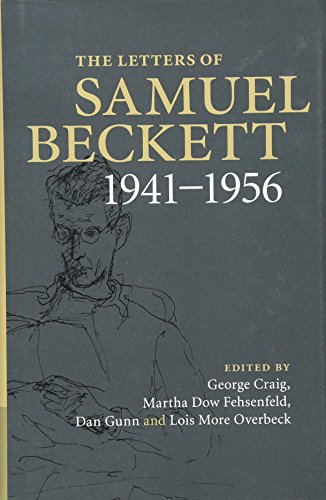 The Letters of Samuel Beckett makes available for the first time a comprehensive range of letters of one of the greatest literary figures of the twentieth century. This volume covers the writing of his greatest works, including Waiting for Godot.

This second volume of The Letters of Samuel Beckett opens with the war years, when it was often impossible or too dangerous to correspond. The surge of letters beginning in 1945, and their variety, are matched by the outpouring and the range of Beckett's published work. Primarily written in French and later translated by the author, the work includes stories, a series of novels (Molloy, Malone meurt and L'Innommable), essays and plays - most notably En attendant Godot. The letters chronicle a passionately committed but little known writer evolving into a figure of international reputation, and his response to such fame. The volume provides detailed introductions which discuss Beckett's situation during the war and his crucial move into the French language, as well as translations of the letters, explanatory notes, year-by-year chronologies, profiles of correspondents and other contextual information.
'[A] magnificent volume of letters ... painstakingly prepared by the editors.' Irish Times
'Not to beat about the bush, here's the book of the year ... Beckett's is the most significant literary correspondence of its time ... a marvellous book.' Evening Standard
'The waiting is over ... as painstakingly researched and rewarding as the first volume ... This meticulous, all-encompassing collection is the sweetest of treats for Beckett fans.' Sunday Times Ireland
'It is hard ... to read this 800-page tome and not come away rather liking Sam Beckett.' Irish Daily Mail
'The best news is there are still two volumes left to come ... this project should constitute one of the most valuable feats of literary scholarship to appear in the past fifty years.' Sunday Times
'With the publication of this second exhaustively-accoutred volume, The Cambridge University Press edition of Samuel Beckett's letters is shaping up to be an imposing edifice of literary scholarship ... Beckett's letters are a joy to read.' Sunday Business Post
'It sheds a lot of light on his friendships, and more generally. It's illuminating, even for people who knew him very well.' Edward Beckett, Irish Times
'Despite the size of the book, every effort has been expended by the editors to assist the reader. Almost every detail has been helpfully annotated; a precise chronology for each year has been provided, noting the main events in Beckett's career and the principal current events ... This is a book to treasure.' The Irish Independent
'Speaks volumes about Beckett ... A fascinating aspect of the letters is witnessing the emergence of an artist, and the inward turn necessary to fulfil his great vision ... Perhaps the chief pleasure of this volume is the cliche-busting Beckett that emerges.' Irish Examiner
'A sequel much richer than the first, retracing Beckett's core literary output. And what majestic, impassioned letters! The editorial team hits the right notes: useful supporting apparatus; extensive translations from French; but best of all, selections of Beckett often at his best, 'searching for a way of capitulating without giving up utterance - entirely'.' Matthew Feldman, The Times Higher Education Supplement
'Beckett lovers ... will give thanks for the concerted scholarship of this perfectly pitched quartet of editor-translator-chroniclers.' Independent on Sunday
'The second volume of what looks set to be a major achievement of 21st century publishing, an astonishing work of scholarship, appraisal and documentation ... The erudite and indefatigable editors have put together an outstanding and illuminating selection from Beckett's correspondence with friends, acquaintances, publishers, translators, all kinds of business associates - all having a bearing, in some sense or other, on the imperishable work.' The Independent
'Anybody unfamiliar with the life of writings of Beckett would be well advised to go for a biography of the man first. But for anyone who wishes to go beyond that stage, this generous volume will prove a very full and rewarding read.' The Bookbag
'These letters ... remind us how indomitable and irresistible [Beckett] was.' The Spectator
'Letter by letter, Beckett's genius is revealed ... a marvellous book.' The Scotsman
George Craig, Editor and French Translator, is an Honorary Research Fellow at the University of Sussex. Martha Dow Fehsenfeld, Founding Editor, was authorized by Samuel Beckett to edit his correspondence in 1985. Dan Gunn, Editor, is Professor of Comparative Literature and English at The American University of Paris. Lois More Overbeck, Managing Editor, is a Research Associate of the Laney Graduate School, Emory University.
General introduction; French translator's preface George Craig; Editorial procedures; Acknowledgments; Permissions; Abbreviations; Introduction to Volume 2 Dan Gunn; Letters, 1941-1956; Profiles; Bibliography; Index.
GOR010402074
9780521867948
0521867940
The Letters of Samuel Beckett: Volume 2, 1941-1956 Samuel Beckett
Samuel Beckett
The Letters of Samuel Beckett
Gebraucht - Wie Neu
Gebundene Ausgabe
Cambridge University Press
2011-09-12
886
N/A
Die Abbildung des Buches dient nur Illustrationszwecken, die tatsächliche Bindung, das Cover und die Auflage können sich davon unterscheiden.
Das Buch wurde gelesen, ist aber in gutem Zustand. Alle Seiten sind intakt, der Einband ist unversehrt. Leichte Gebrauchsspuren am Buchrücken. Das Buch wurde gelesen, sieht jedoch noch wie neu aus. Der Bucheinband weist keine sichtbaren Gebrauchsspuren auf. Gegebenenfalls ist auch ein Schutzumschlag verfügbar. Keine fehlenden oder beschädigten Seiten, keine Risse, eventuell minimale Knicke, keine unterstrichenen oder markierten Textstellen, keine beschrifteten Ränder.