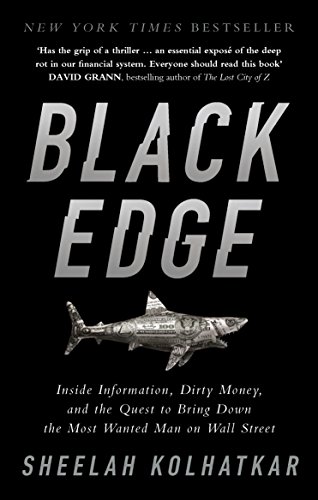 But even as the company bearing his name pled guilty, Cohen himself was never charged, and is free to start trading publicly again from January 2018.

Black Edge offers a revelatory look at the grey zone in which so much of Wall Street functions, and a window into the transformation of the worldwide economy.

Black Edge: Inside Information, Dirty Money, and the Quest to Bring Down the Most Wanted Man on Wall Street Sheelah Kolhatkar

'Black Edge has the grip of a thriller ... Everyone should read this book' - David Grann, New York Times bestselling author of THE LOST CITY OF Z

How do super-rich bankers get away with it?

There is a powerful new class of billionaire financiers in the world, who use their phenomenal wealth to write their own rules and laws. Chief among them is Steven Cohen, a Wall Street legend, and the basis for Damian Lewis's character in BILLIONS, who built his hedge fund into a $15 billion empire on the basis of wizard-like stock trading, and who flies to work by helicopter and owns one of the largest private art collections in the world. But his iconic status was shattered when his fund became the target of a sprawling FBI investigation into insider trading, charged with using illegal inside information - or 'black edge' - to beat the market. His firm, SAC Capital, was ultimately indicted and pled guilty to charges of securities and wire fraud, and paid record criminal and civil fines of nearly $2 billion. But even as the company bearing his name pled guilty, Cohen himself was never charged, and is free to start trading publicly again from January 2018.

Black Edge offers a revelatory look at the grey zone in which so much of Wall Street functions, and a window into the transformation of the worldwide economy. With meticulous reporting and powerful storytelling, this is a riveting, true-life legal thriller that takes readers inside the US government's pursuit of Cohen and his employees, and raises urgent questions about the power and wealth of those who sit at the pinnacle of the financial world.

Fast-paced and filled with twists, Black Edge has the grip of a thriller. It is also an essential expose of our times-a work that reveals the deep rot in our financial system. Everyone should read this book.

Black Edge is a real-life thriller about the government's attempt to get the legendary trader Steve Cohen on insider trading charges-and the lengths to which he goes to elude them. Using deep reporting and top-notch storytelling, Sheelah Kolhatkar is able to shed new light on one of the least known and most fascinating characters on Wall Street.

-- Bethany McLean, co-author of THE SMARTEST GUYS IN THE ROOM
Black Edge is not just a work of major importance, it is also addictively readable-and horrifyingly compelling. Sheelah Kolhatkar pulls back the curtain on the cheating, corruption, and skulduggery that underlie large swaths of the hedge fund industry and some of Wall Street's most fabled fortunes. This book is as hard to put down as it is to stomach. -- Jane Mayer, New York Times bestselling author of DARK MONEY
If you liked James B. Stewart's Den of Thieves, Sheelah Kolhatkar's thrilling Black Edge should be next on your reading list. * The Wall Street Journal *
A richly reported, entertaining tale about the cat-and-mouse game between the government and Cohen. -- Andrew Ross Sorkin * The New York Times Book Review *
A lot of people do not trust Wall Street. They regard it as a moneymaking machine for those who work there, which has little interest in practice in its stated aim of channelling capital into businesses and helping them to grow for the broader benefit of society. For such sceptics, Steven Cohen is Exhibit A. -- John Gapper * Financial Times *
A modern version of Moby-Dick, with wiretaps rather than harpoons. -- Jennifer Senior * The New York Times *
Excellent * The Economist *
Sheelah Kolhatkar is a former hedge fund analyst and staff writer at The New Yorker, where she writes about Wall Street, Silicon Valley, and politics, among other things. She has appeared as a speaker and commentator on business and economics issues at conferences and on broadcast outlets including CNBC, Bloomberg Television, Charlie Rose, PBS NewsHour, WNYC and NPR. Her writing has also appeared in Bloomberg Businessweek, New York, The Atlantic, The New York Times and other publications.
GOR009009078
9780753552230
075355223X
Black Edge: Inside Information, Dirty Money, and the Quest to Bring Down the Most Wanted Man on Wall Street Sheelah Kolhatkar
Sheelah Kolhatkar
Gebraucht - Sehr Gut
Broschiert
Ebury Publishing
2018-01-25
368
Long-listed for Financial Times and McKinsey Business Book of the Year 2017 (UK)
Die Abbildung des Buches dient nur Illustrationszwecken, die tatsächliche Bindung, das Cover und die Auflage können sich davon unterscheiden.
Dies ist ein gebrauchtes Buch. Es wurde schon einmal gelesen und weist von der früheren Nutzung Gebrauchsspuren auf. Wir gehen davon aus, dass es im Großen und Ganzen in einem sehr guten Zustand ist. Sollten Sie jedoch nicht vollständig zufrieden sein, setzen Sie sich bitte mit uns in Verbindung.