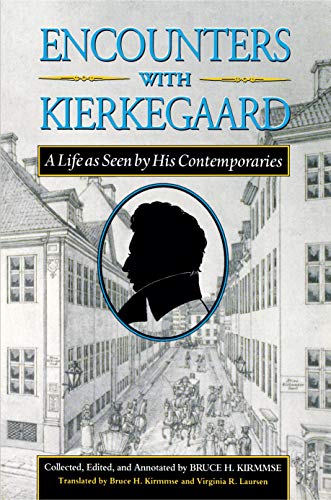 This work aims to provide an understanding of the problematic personality of Soren Kierkegaard. By analyzing the observations of his contemporaries, the author aims to create a picture of what Kierkegaard was like and what it was like to be the object his wrath or friendship.

Encounters with Kierkegaard: A Life as Seen by His Contemporaries Soren Kierkegaard

Encounters with Kierkegaard is a collection of every known eyewitness account of the great Danish thinker. Through the sharp observations of family members, friends and acquaintances, supporters and opponents, the life story of this elusive and remarkable figure comes into focus, offering a rare portrait of Kierkegaard the man. Often viewed by his contemporaries as a person who deliberately cultivated an air of mystery and eccentricity, Soren Kierkegaard (1813-55) has been, then and now, a subject of great speculation. His startling attack on the established church, his broken engagement with a young woman from a respected family, and his searing criticisms of literary figures - from the editors of The Corsair to Hans Christian Andersen - are among the acts that brought him much notoriety during his short lifetime. Yet arriving at a sense of the philosopher's personality and the motives behind his behaviour has been a difficult task. He left no memoirs or autobiography, but in the enormous canon of his published writings, the author and person Soren Kierkegaard is problematically present in a welter of disguises. An indispensable path to understanding what he was like as a person, maintains Bruce Kirmmse, is through the observations of his contemporaries. These accounts, ranging from the writings of Meir Aron Goldschmidt, editor of The Corsair, to the recollections of Kierkegaard's fiancee, are organised around the major episodes of the philosopher's life. They enable us to glimpse, among many things, his spiritual and intellectual development, to get a sense of what it was like to be the object of his friendship or his wrath, and to examine various persons' opinions about his relationship with his young fiancee. The memories of this woman, Regine Olsen, who later married Fritz Schlegel, are among the most moving passages: they reveal her profound suffering, her personal understanding of Kierkegaard, and the satisfaction she ultimately felt, knowing that he took her with him into history. This collection of first-hand accounts invites the reader to compare and interpret a wealth of fascinating stories, and in the end forms an intriguing do-it-yourself biography for both the scholar and general reader.
Meticulously researched and beautifully produced. * Religious Studies Review *
Kierkegaard left no memoirs or autobiography.... However, many of his contemporaries wrote down observations about him. All of these that are still available have been collected into this impressive volume. They cover all the major episodes of his life and provide an invaluable glimpse into his spiritual and intellectual development in all its agony and glory.... Meticulously researched and beautifully produced.---Peter C. Hodgson, Religious Studies Review
Bruce H. Kirmmse is Professor of History at Connecticut College and has served as the director of the Department of Soren Kierkegaard Research at the University of Copenhagen. He is the author of Kierkegaard in Golden Age Denmark and serves on the editorial board of Kierkegaardiana and the advisory boards of the Soren Kierkegaard Research Centre in Copenhagen and the Howard and Edna Hong Kierkegaard Library at St. Olaf College in Northfield, Minnesota.
GOR006463166
9780691011066
0691011060
Encounters with Kierkegaard: A Life as Seen by His Contemporaries Soren Kierkegaard
Soren Kierkegaard
Gebraucht - Sehr Gut
Gebundene Ausgabe
Princeton University Press
19960519
416
null null null null null null null null null null
Die Abbildung des Buches dient nur Illustrationszwecken, die tatsächliche Bindung, das Cover und die Auflage können sich davon unterscheiden.
Dies ist ein gebrauchtes Buch. Es wurde schon einmal gelesen und weist von der früheren Nutzung Gebrauchsspuren auf. Wir gehen davon aus, dass es im Großen und Ganzen in einem sehr guten Zustand ist. Sollten Sie jedoch nicht vollständig zufrieden sein, setzen Sie sich bitte mit uns in Verbindung.