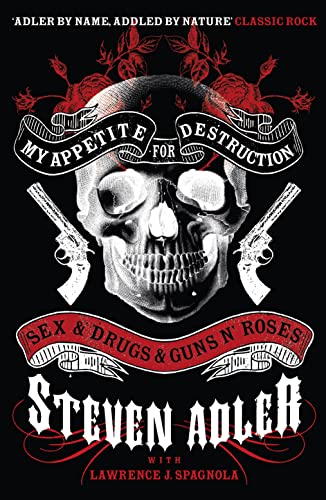 My Appetite for Destruction Steven Adler

Guns N' Roses is one of the world's most successful rock bands, with estimated sales of 90 million albums worldwide. Steven Adler is the original drummer, with an infamous past of sex, drugs, and rock 'n roll that led to his removal from the band.

And here, for the first time, Steven Adler tells it all. In My Appetite for Destruction, he reveals with wit and candour his personal struggles with drug addiction, including the financial ruin he faced after being kicked out of Guns N' Roses and the health problems that almost claimed his life several times - two heart attacks, a suicide attempt, and a debilitating stroke, as well as an epic 20-year addiction to crack and heroin.

Now clean and sober, Steven sets the record straight on his life and his time with Guns N' Roses, during the rise and collapse of one of the greatest rock bands of all time.

"Great for the die-hard GNR fan...This is a cautionary tale, all the way."--Penthouse

Steven Adler was the drummer of Guns N' Roses from 1985 to 1990. In 2003, he started Adler's Appetite, with whom he released an EP and continues to perform live. He lives in the Hollywood Hills with his wife, Carolina Adler.