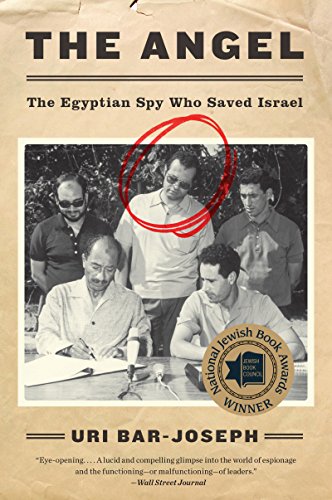 The Angel: The Egyptian Spy Who Saved Israel Uri Bar-Joseph

Now in paperback: A riveting feat of research and reportage hailed by the WSJ and NYTBR, The Angel explores one of the twentieth century's most compelling spy stories: the sensational life and suspicious death of Ashraf Marwan, a top-level Egyptian official who secretly worked for Israel's Mossad.

"Eye-opening.... A lucid and compelling glimpse into the world of espionage and the functioning-or malfunctioning-of leaders."-WSJ

SOON TO BE A NETFLIX ORIGINAL MOVIE

As the son-in-law of Egyptian president Gamal Abdel Nasser and a close adviser to his successor, Anwar Sadat, Ashraf Marwan had access to the deepest secrets of his country's government. But Marwan had a secret of his own: He was a spy for the Mossad, Israel's renowned intelligence service. Known to his handlers as "the Angel," Marwan turned Egypt into an open book and saved Israel from a devastating defeat by tipping off the Mossad in advance of the joint Egyptian-Syrian attack on Yom Kippur in 1973.

Remarkably, Marwan eluded Egypt's ruthless secret police for decades. In later years he enjoyed a luxurious life-but that would come to an abrupt end in 2007, when his body was found in a bed of roses in the garden below his apartment building in London. Police suspected he had been thrown from his balcony on the fifth floor, but the case has remained unsolved. Until now.

After Marwan died, details of his shadowy life were slowly revealed. Drawing on meticulous research and exclusive interviews with key figures involved, The Angel is the first book to discuss Marwan's motives, how his identity as a Mossad spy was deliberately exposed by none other than the former chief of Israel's Military Intelligence, and how the information he provided was used-and misused. Expanding on this focus, it sheds new light on the modern history of the Middle East and the crucial role of human espionage in shaping the fate of nations. And, for the first time, it answers the questions haunting Marwan's legacy: In the end, whom did Ashraf Marwan really betray? And who killed him?

"Trenchant, serpentine.... Packed with jaw-dropping and intimate details.... Bar-Joseph has done a laudable job of synthesizing the voluminous Israeli government information about Marwan, always keeping his eye for some of the outrageous-even absurd-turns of events in a high stakes drama." -- New York Times Book Review
"A trenchant account of the career of a master spy." -- New York Times Book Review Editors' Choice
"A trenchant, serpentine account of the career of the Yom Kippur mole." -- New York Times Book Review, "9 Thrillers (One True) That Times Editors Think You Should Read This Summer"
"Uri Bar-Joseph, a political science professor at the University of Haifa and an expert on Israeli intelligence, has written a fast-paced narrative that rivals the best spy fiction. The critical difference is that the story is real." -- San Francisco Gate
"This is the best spy story I've ever read-and it's all true. Uri Bar-Joseph weaves a suspenseful tale of the dangerous life-and mysterious death-of a spy who did nothing less than change the course of history in the Middle East. You won't be able to put it down." -- Howard Blum, New York Times bestselling author of The Last Goodnight and Dark Invasion
"Eye-opening.... A lucid and compelling glimpse into the world of espionage and the functioning-or malfunctioning-of leaders." -- Wall Street Journal
"This is a remarkable story of Israel's greatest spy ever, and an intelligence disaster that almost doomed the state. Deeply reported and powerfully told, The Angel is a must-read espionage saga." -- David Hoffman, Pulitzer Prize-winning author of The Dead Hand and The Billion Dollar Spy
"This remarkable book reveals to us a hidden history, showing how little we actually know of events we thought we understood. One of the most exciting-and surprising-books on Israel I've read." -- Yossi Klein Halevi, author of National Jewish Book Award winner Like Dreamers
"Remarkable.... Partly a spy thriller, The Angel is also an invaluable account of major historical figures." -- The Weekly Standard online
"A fascinating read into the wilderness of mirrors of espionage, with a laser focus on one of Israel's greatest spies.... A tremendous case study for any student of intelligence, geo-politics, or history. The book should be required reading for any special agent or intelligence officer." -- Fred Burton, New York Times bestselling author and VP Intelligence, Stratfor
"Ashraf Marwan was the most valuable source the Mossad had ever recruited.... Bar-Joseph's fascinating book is an accurate and reliable account of the career of one of the 20th century's most important spies." -- Maj. Gen. (Ret.) Zvi Zamir, Former Mossad Director (1968-1974)
"Makes a convincing case that Marwan not only never misled the Israelis, but was actually astoundingly valuable to them.... Highly detailed.... Rewarding to anyone interested in Middle East intrigue.... Fascinating." -- Dan Raviv, Moment Magazine
"Intriguing.... The author...shows great empathy for a man who was in turn respected, reviled, and almost certainly murdered. Well-researched and candidly told, this book deserves shelf space next to volumes on Vladimir Vetrov and Kim Philby." -- Kirkus Reviews
"Establishes beyond doubt that Marwan was the spy who most benefitted Israel in the 1970s and 1980s.... This work will be of great interest to readers trying to understand the byzantine world of international intelligence." -- Library Journal
"A fascinating read, possibly the best study ever written on espionage and the Yom Kippur War." -- Jewish Chronicle
"Gripping . . . . Drawing on research and extensive interviews with people who experienced events firsthand, The Angel sheds new light on a crucial period in the history of modern Egypt and the Middle East, as well as the origins of 2011's Arab Spring." -- Jewish Book Council
"Bar-Joseph addresses the key question that for decades has haunted the intelligence community as much as the public....[he] draws a historical and a psychological picture of Marwan that analyses his motivations." -- AlJazeera.com
"Required reading-as a terrible warning-for everyone involved in intelligence.... A terrific book. It has all the tension, plot twists, and dramatis personae of a spy novel, only the story is real." -- Washington Free Beacon
"Captivating.... A tale of espionage at the highest level." -- National Interest.org
"Few things satisfy the appetite for suspense like a true-life spy story as thrilling and intriguing as the best fictional ones.... Bar-Joseph's writing, and this translation, offer an extremely compelling tale. -- Haaretz
"[Ashraf Marwan's] intriguing life and suspicious death are detailed in Uri Bar-Joseph's fascinating new book.... which features extensive research and interviews with those who knew Marwan." -- Jewish News
Uri Bar-Joseph is Professor of Political Science at the University of Haifa. He is the author of six books about intelligence, Israel's national security strategy, and the Arab-Israeli conflict. His coming book, Intelligence Success and Failure: A Comparative Study (with Rose McDermott), is forthcoming from Oxford University Press.
GOR009876457
9780062420138
0062420135
The Angel: The Egyptian Spy Who Saved Israel Uri Bar-Joseph
Uri Bar-Joseph
Gebraucht - Sehr Gut
Broschiert
HarperCollins Publishers Inc
2018-03-22
400
N/A
Die Abbildung des Buches dient nur Illustrationszwecken, die tatsächliche Bindung, das Cover und die Auflage können sich davon unterscheiden.
Dies ist ein gebrauchtes Buch. Es wurde schon einmal gelesen und weist von der früheren Nutzung Gebrauchsspuren auf. Wir gehen davon aus, dass es im Großen und Ganzen in einem sehr guten Zustand ist. Sollten Sie jedoch nicht vollständig zufrieden sein, setzen Sie sich bitte mit uns in Verbindung.