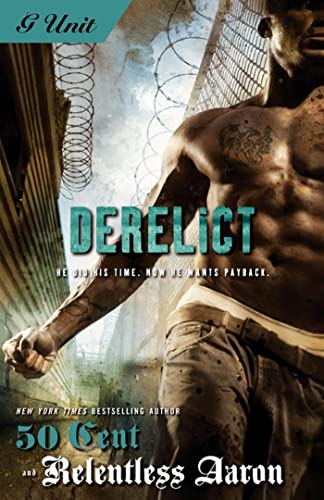 Thought provoking in some ways and menacing in others, DERELICT is a story about Johnny "Pooh" Thompson, a man who walks a wayward path in the free world; his own path towards self-destruction. Sure, there are tools and resources right under his nose, but it's up to him to access them. Through and through, there's a thin line that Pooh needs to walk between winning and losing, and he'll need to decide which his destiny is. In either instance, society sees Pooh as a derelict.

Relentless Aaron has taken the street lit world by storm, publishing more than thirty novels. He lives in New York City. Visit his website at RelentlessAaron.com.

50 Cent is a record-breaking rap recording artist, entrepreneur, music producer, and actor. His debut album, Get Rich or Die Tryin', sold more than 12 million units worldwide, is certified eight times platinum, and was the basis for the semi-autobiographical film of the same title, in which he starred. He is the first artist to have four songs in the top ten of Billboard's Hot 100 since the Beatles in 1964, and in 2012 he released his fifth studio album. He published his memoir, the New York Times bestseller From Pieces to Weight, which was hailed as "cool, hard, and vivid, a minor classic of gangster rap noir" (The New York Times). Under the G-Unit brand, his business empire includes a record label, apparel and footwear ventures, vitamin water, and more. He also created the nonprofit organization The G-Unity Foundation, which aims to better the life of urban youth. Learn more at 50cent.com.