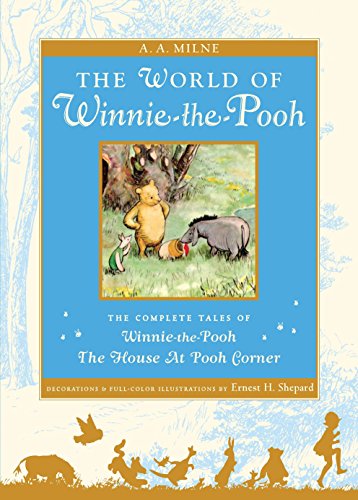 The World of Pooh by A. A. Milne

The World of Pooh: The Complete Winnie-the-Pooh and The House at Pooh Corner by A. A. Milne

Lifelong devotees and new friends of the Bear of Very Little Brain will be glad to see all twenty of A. A. Milne's world-famous Winnie-the-Pooh stories brought together in one beautiful volume. Milne's prose and Ernest H. Shepard's drawings-including full-color art created especially for these editions-perfectly capture the feelings of childhood.
Alan Alexander Milne was born in London on January 18, 1882, the third and youngest son of a schoolmaster. At age eleven, he won a scholarship to the Westminster School. He went on toattend Cambridge University and became the editor of the undergraduate paper, Granta. After graduating from Cambridge in 1903, Milne moved back to London with enough savings to live for one year. He was determined to become a writer. By 1906, he had been offered theposition of Assistant Editor at Punch, a classic British humor magazine. He remained at Punch for the next eight years.

In 1913, Milne married Dorothy de Selincourt (known as Daphne) and moved to a house in London's Chelsea section. When World War I broke out, he enlisted in the Royal Warwickshire Regiment, eventually serving in France. During his training period, he wrote his first play, Wurzel-Flummery, which was produced in London in 1917.

By 1919, having completed one book and several plays, Milne finally achieved financial independence. His play, Mr. Pim Passes By, previously staged in London, was produced by theTheatre Guild in New York City. It was as great a success there as it had been on the London stage. Milne was now well established as a witty and fashionable London playwright. In 1920, Christopher Robin Milne was born, an event that was to change the history of children'sliterature. In 1923, during a rainy holiday in Wales, Milne began work on a collection of verses for children. The result was When We Were Very Young, published in 1924.

Demand for Milne's whimsical work was overwhelming, and in 1926, he duplicated his earlier success with the publication of Winnie-the-Pooh. The sequel, The House at Pooh Corner, followed in 1927. Now We Are Six, another charming collection of verse, followed one year later. It was through these four books, all illustrated by the wonderfully talented Ernest H. Shepard,that Milne acquired a vast audience outside of the theater. In the years since their initial publication, interest in these books has grown and grown.

Milne continued to be a prolific essayist, novelist, and poet until his death in 1956.

copyright (c) 2000 by Penguin Putnam Books for Young Readers. All rights reserved.
Ernest H. Shepard was born in 1879 in London. His father was an architect and his mother whodied when he was ten years old was the daughter of a notable watercolorist. It was she who firstencouraged young Ernest to paint and draw. Art became Ernest's passion, and after attendingHeatherly's Art School and the Royal Acadamy Schools, Shepard supported himself by drawingfor the illustrated papers and by illustrating books.

When World War I broke out, Shepard served in France, Belgium, and Italy, attaining the rank ofMajor. On his return to England, he continued with his art. He became a regular contributor toPunch, the classic British humor magazine, where he met A. A. Milne, a man who was to beinstrumental to his career. Shepard was elected to the editorial board of Punch, and shortlythereafter, he agreed to do the illustrations for Milne's first book of verse, When We Were VeryYoung.

The illustrations that Shepard created for all four of the Pooh books received worldwide acclaim.For the next thirty years, he continued to illustrate books for both adults and children. In 1973,for the first time, he added color to his drawings for Winnie-the-Pooh. Shepard ultimately donatedseveral hundred drawings to the Victoria and Albert Museum in London.
Ernest H. Shepard continued to pursue his love of drawing until his death in1976.copyright ? 2000 by Penguin Putnam Books for Young Readers. All rights reserved.

GOR008932610
9780525444473
0525444475
The World of Pooh: The Complete Winnie-the-Pooh and The House at Pooh Corner by A. A. Milne
A. A. Milne
Winnie-the-Pooh
Used - Well Read
Hardback
Dutton Books for Young Readers
2010-10-14
384
N/A
Book picture is for illustrative purposes only, actual binding, cover or edition may vary.
This is a used book. We do our best to provide good quality books for you to read, but there is no escaping the fact that it has been owned and read by someone else previously. Therefore it will show signs of wear and may be an ex library book
Trustpilot